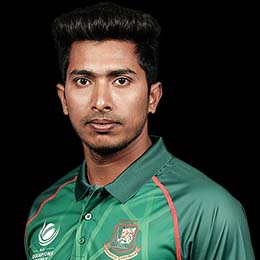 A left-handed batsman who has played twice in the U-19 World Cup (2010 & 2012), he started out as an all-rounder, but found his potential with the bat and was selected for the tour of Zimbabwe in an ODIs after an impressive debut in first-class cricket. It also brought him a spot in the 2015 World Cup squad, despite having played just one ODI. He was an integral part of the Bangladesh team which helped defeat India, Pakistan and South Africa at home in successive series. He made his debut in Test cricket in April 2015 against Pakistan, but failed to live upto the selector's expectations. He was dropped eventually but soon returned and has been a regular in the starting XI. His best performance came when he struck three consecutive fifties against Sri Lanka on their backyard.

As they set up the innings, Mushfiqur Rahim, unbeaten on 28, hit a six over deep mid-wicket to fittingly finish the game in a show of sheer domination.

The 34-year-old further questioned on what basis the duo received a call back in the team after being dropped, initially.

Bangladeshi cricketer Soumya Sarkar took a brilliant catch to dismiss Pakistan’s Mohammad Hafeez for 64 on Wednesday in ICC World Twenty20 match against Pakistan at Eden Gardens in Kolkata. In the 17th over of

Bangladesh sweeps aside Pakistan in a rare ODI series whitewash

Dhaka: Bangladesh whitewashed Pakistan in a one-day international series for the first time after winning the third match by an emphatic eight wickets on Wednesday.Bangladesh went into the match having already achieved a first ODI

Melbourne: An ecstatic Indian skipper Mahendra Singh Dhoni on Thursday said his diving catch to remove Bangladesh batsman Soumya Sarkar in the quarter-final of the cricket World Cup was a fluke as the ball had