Former UP chief minister Akhilesh Yadav has reacted to Vikas Dubey's encounter. The dreaded gangster was killed earlier today when UP STF's car carrying him overturned near Kanpur.

Vikas Dubey, most-wanted criminal in Uttar Pradesh and prime accused in killing of 8 policemen, has been killed in an encounter today. The incident took place when the gangster tried to escape after UP STF's car in which he was being brought to Kanpur overturned. Meanwhile reacting to the incident, former Uttar Pradesh Chief Minister Akhilesh Yadav has alleged that the car did not overturn... attempt to save the government.

Taking it to Twitter, Akhilesh Yadav said, "the car (UP STF's car that was carrying Vikas Dubey) did not overturn... attempt to save the government as secrets could have been unveiled." (दरअसल ये कार नहीं पलटी है, राज़ खुलने से सरकार पलटने से बचाई गयी है.) 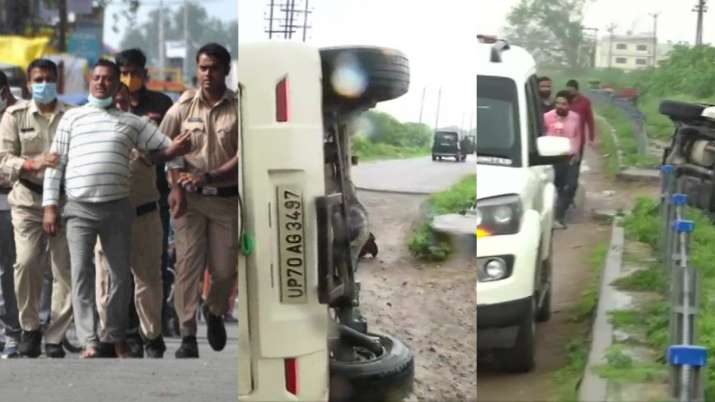 Gangster Vikas Dubey was killed in an encounter after a police vehicle carrying him from Ujjain to Kanpur met with an accident and he tried to escape from the spot in Bhauti area, a senior police official said. "Dubey was injured in the encounter and he was declared dead in the hospital," ADG Kanpur range, JN Singh said.

Doctors have declared him (Vikas Dubey) dead: SP Kanpur West, after gangster Vikas Dubey was brought to Kanpur's LLR Hospital following police encounter. According to police, Dubey had attempted to flee by snatching pistol of the injured policemen after car overturned. pic.twitter.com/oBfBCQHnfq

After the accident, Dubey snatched the pistol of an STF personnel and tried to flee but was surrounded by the police team and he was injured in an exchange of fire. He was rushed to the hospital where he was declared dead.

The officer confirmed that Dubey "sustained injuries" but did not confirm to what extent, saying it would be revealed in the postmortem report.

Senior Superintendent of Police (Kanpur) Dinesh Kumar P said that the accident took place on Friday morning when it was raining heavily and the police vehicle overturned near Kanpur.

"Some policemen accompanying Dubey were also injured in the incident," the SSP said. He did not specify whether they were injured in the accident or during the encounter.

8 policemen, including DSP Devendra Mishra, were ambushed in Bikru village in Chaubeypur area of Kanpur when they were going to arrest Dubey and fell to bullets fired from rooftops shortly after midnight on July 3. Earlier, five members of Dubey gang were killed in separate encounters.

While on July 3, two of his associates, Prem Prakash Pandey and Atul Dubey, were killed by police in an encounter in Kanpur, on July 8 the police killed another aide, Amar Dubey, who carried a reward of Rs 50,000, in an encounter in Maudaha village in Hamirpur district.

On July 9, two more aides of gangster Vikas Dubey, wanted in connection with the Kanpur ambush, were killed in separate encounters in Kanpura and Etawah districts.

While Kartikeya alias Prabhat was killed in Kanpur when he tried to flee from police custody, another aide of Vikas Dubey, Praveen alias Bauwa Dubey, was shot dead in an encounter in Etawah.

Kartikeya, who was arrested from Faridabad on Wednesday, was being brought to Kanpur on transit remand when he snatched the pistol of a policeman and tried to flee.

Vikas Dubey, who was carrying a reward of Rs five lakh on information leading to his arrest, was arrested from Ujjain in Madhya Pradesh on Thursday.