Bigg Boss 15: Abhijit Bichukale to not enter as wild card after he tests COVID positive?

Bigg Boss announced that Rashami Desai, Devoleena Bhattacharjee and Abhijit Bichukale, who earned his spurs in 'Bigg Boss Marathi' will be entering the house as wild cards. However, there's a buzz that Abhijit has been tested Covid positive. And the latest news doing the rounds is that Rakhi Sawant will be replacing him and is entering the show as the third wild card contestant.

The upcoming episodes of Bigg Boss 15 will be loaded with twists and turns as the house will witness the entry of wild card contestants. In the last few days, three wild card entries have been named that will make their way inside the BB house. They are Rashami Desai, Devoleena Bhattacharjee and Abhijit Bichukale, who earned his spurs in 'Bigg Boss Marathi'. But as per social media speculations Abhijit Bichukale will not be entering as wild card, but nothing is confirmed officially.

There is a buzz that Abhijit is showing all symptoms of COVID-19 and is under strict quarantine. Since Rahami and Devoleena also shot with him for the weekend ka vaar episode, hence they are also under quarantine. Therefore, their entry in the show has been postponed. 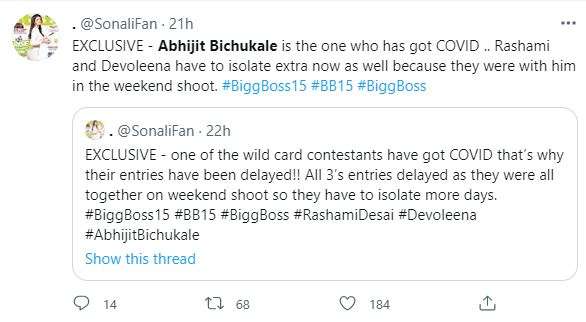 And the latest news doing the rounds is that Rakhi Sawant will be replacing Abhijit and is entering the show as a wild card contestant. Rakhi who has participated in the previous seasons of the show enjoys massive fanbase and is expected to add to the entertainment factor in the show. Despite all this no confirmation is made officially and still a lot has to be revealed.

Meanwhile, Bigg Boss has announced a new task in which the 'Top 5' contestants including Shamita Shetty, Karan Kundrra, Tejasswi Prakash, Pratik Sehajpal and Nishant Bhat have a chance to save one contestant each, and the remaining contestants will be evicted from the house. The bottom six contestants are Simba Nagpal, Rajiv Adatia, Neha Bhasin, Vishal Kotian, Jay Bhanushali and Umar Riaz. Simba Nagpal's name is doing the rounds for being the first to get eliminated.