Is Champions League ban on Manchester City a ray of hope for Messi-Guardiola reunion?

The desire to win the premier European title might take Guardiola away from Etihad. To acquire Guardiola's service will not be an easy task for any club as hiring a manager of his stature will not be a walkover.

Premier League giants Manchester City were handed a two-season ban from European competitions by UEFA for breaching Financial Fair Play policy on Friday. They will not take part in the next two seasons of Champions League and Europa League and will pay the fine of 30 million Euros ($33 million).

However, City are still eligible to participate in the ongoing season of Champions League as they will take on Real Madrid in the Round of 16 match on Thursday 27 in the first leg. After an investigation that was sparked by leaked internal correspondence showing City overstated sponsorship revenue and masked the source of revenue from deals to tied to the Gulf nation in a bid to comply with Financial Fair Play regulations.

Manchester City, however, may appeal the decision to the Switzerland-based Court of Arbitration for Sport.

"If Manchester City Football Club exercises that right, the full reasoned decision of the Adjudicatory Chamber will not be published prior to publication of the final award by the CAS," UEFA said.

He has always displayed his hunger to win the Champions League trophy than anything else. The desire to win the premier European title might take him away from Etihad. To acquire Guardiola's service will not be an easy task for any club as hiring a manager of his stature will not be a walkover. But there is one club in the world who can do this i.e FC Barcelona and Guardiola's love for his former club is not hidden from anyone.

Barcelona and Pep Guardiola is the match made in heaven. It's the reunion which everyone wants to happen as soon as possible to watch some exciting football from Barcelona side, which they are missing from past three years. It was the Catalan side, where Pep started his managerial career in 2008-09 season. He managed the club for four seasons and took them to various heights with a historic 2009-10 year where they won the sextuple (six trophies in a single season). He left the club after 2011-12 season with 14 trophies for Barcelona. In his time at Barcelona, Guardiola produced a beast in the name of Lionel Messi- who is most often considered as the greatest player of all time. Guardiola brought back the great Johan Cyruff philosophy in Barcelona - tiki-taka. The exciting game gets his own twist with Barcelona playing dominating possession-based football. Barca might have won several trophies after Guardiola's departure but the spark was missing in their game. The current situation in the La Liga champions' camp is worse than ever, as they sacked Ernesto Valverde as their manager mid-season and hired Quique Setien. The former Real Betis coach is trying his best to bring back the team onto a right path but the recent series of events spit another problem in the camp. 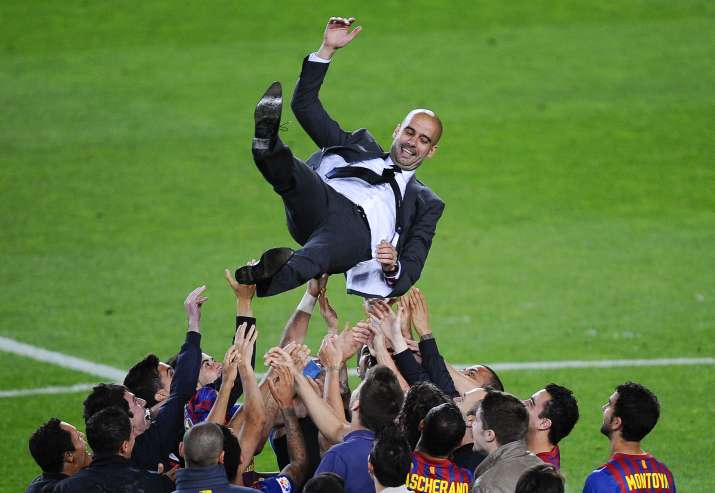 Recently, Barcelona talisman Lionel Messi lashed out at the sporting director of the club - Eric Abidal, who criticized the players’ efforts under Ernesto Valverde.

The Catalan giants last won the UEFA Champions League in 2014-15 and with a team like Barcelona and the resources they had, the draught of premier European title is a dark spot on them.

Guardiola is one of the few or probably the only manager in the world who can change things at Barcelona and with Messi playing under him, the club can bring back the glory days to Nou Camp.