The minimum temperature in the national capital on Friday may drop down to 6-degree Celcius and is expected to dip further in the coming days.

Delhi may witness a sharp fall in the minimum temperature in the coming days following last week's rainfall that has already caused mercury to drop down, according to the latest prediction by the Met department.

Delhiites may have to deal with the extremely cold situation as the minimum temperature on Friday may fall to as low as 6-degree Celcius.

The Met department has also predicted that Saturday will be a cloudy day in Delhi while some areas may also witness a few spells of rain.

However, on Sunday, the minimum temperature in the national capital could remain around 7 degrees whereas, on Monday and Tuesday, the temperature is expected to fall further and might settle around 6 and 5 degrees Celcius. 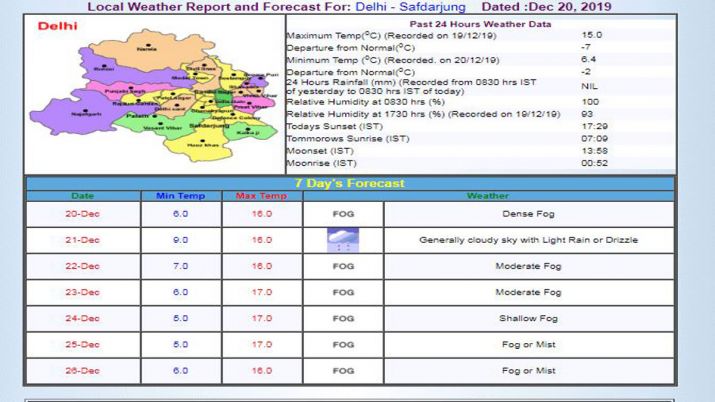 Meanwhile, more than 100 trains are running late due to fog in Delhi which affected rail traffic under the Northern Railways with delays of up to two hours.

Delhi was enveloped in dense fog on Friday with minimum temperature settling at 6.4 degrees Celsius.

Trains on all routes from Delhi via Tundla, Rewari, Agra, Ambala Moradabad, Saharanpur, Bhatinda have been affected by fog. A total of 109 trains are facing delays.

Visibility dipped considerably due to the dense fog.