TKSS Promo Out: Kapil Sharma, Bharti Singh, Archana Puran Singh & others are back with a bang | VIDEO

TKSS makers announced the new season which will soon be hitting your Television screens. Sailing in the same boat, a new promo was shared on Monday on the official Instagram handle of the channel and featured the cast including Kapil Sharma, Krushna Abhishek, Kiku Sharda, Bharti Singh, Chandan Prabhakar, Archana Puran Singh and Sudesh Lehri. Seen it yet?

The Kapil Sharma Show is undoubtedly one of the much-loved shows of the small screen. The comedy show went off-air when the host and comedian Kapil Sharma decided to take some time off for his family. Well now, the makers have announced the new season which will soon be hitting your Television screens. Sailing in the same boat, a new promo was shared on Monday on the official Instagram handle of the channel and featured the cast including Kapil, Krushna Abhishek, Kiku Sharda, Bharti Singh, Chandan Prabhakar, Archana Puran Singh and Sudesh Lehri. It was captioned, "The wait is over, kyunki @kapilsharma lekar aa rahe hain aapka laughter ka weekly dose. Aa raha hai aapka favorite, #TheKapilSharmaShow jald hi, sirf Sony par."

The video shows all of them except Archana Puran Singh dancing their heart out. Soon, Kapil asks where Archana ji is after which she makes an entry and says that she has gone to get her vaccine as 18+ are getting it now. Listening to this, Kapil took a dig at her and replied, "But 80+ got were the first to get vaccinated." She hits him after which the entire team create awareness about vaccination.

ALSO READ: Prince Narula surprises wifey Yuvika Chaudhary on her birthday in the most adorable manner

The first promo was shared by Kapil with a caption reading, "#thekapilsharmashow new season #comingsoon stay tuned to @sonytvofficial for more information #tkss #happiness." It also showed the team promoting everyone to get vaccinated.

In the two videos, Sumona Chakravarti was found missing. She even shared a cryptic post on Instagram after being left out. Her Instagram story talks about the "horrible feeling" about "leaving a situation." It read: "You will never know if something is meant for you if you don't give it a proper chance. Whether it's a relationship, a new job, a new city, or a new experience, throw yourself into it completely and don't hold back. If it doesn't work out then it probably wasn't meant for you and you'll walk away without regret, knowing that you put your whole heart into it.

That's all you can ever do. It's a horrible feeling leaving a situation knowing that you should have and could have done more. So find the courage to take that chance, find the inspiration to make your next move, and once you do, pour your heart into it and don't look back." 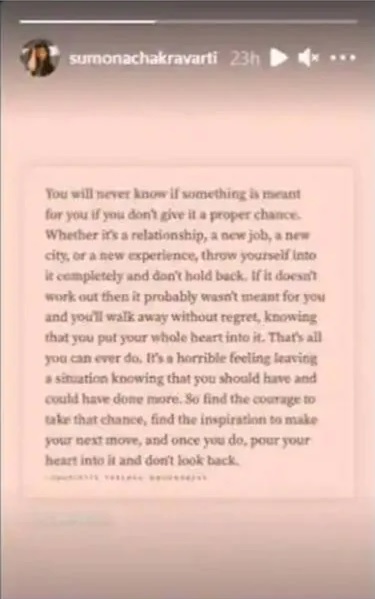 For those unversed, the show will make a comeback in August on the Sony Entertainment Television channel. It will be co-produced by Salman Khan Television (SKTV) and Banijay Asia.