Soon after the song FLY was out in the morning, Sidnaaz lovers were awaiting Sidharth Shukla's reaction to it and it came late in the night. Shehnaaz Gill featured in rapper Badshah's latest music video which dropped on YouTube on Friday.

Television's most loved jodi Shehnaaz Gill and Sidharth Shukla have given their fans, Sidnaazians, another reason to do the happy dance after the Bigg Boss 13 winner sang praises for his rumoured lady love on Twitter. Shehnaaz Gill featured in rapper Badshah's latest music video FLY which dropped on YouTube on Friday. The song is a peppy number that can make anyone groove to its beats. Soon after the song was out in the morning, Sidnaaz lovers were awaiting Sidharth Shukla's reaction to it and it came late in the night.

After watching the latest music video, Sidharth Shukla said that he is proud of Shehnaaz and tweeted, "Just heard the song FLY loved it... @Its_Badshah big fan... and @ishehnaaz_gill you were so good in it... proud of you... more power to you girl." Soon after, Shehnaaz Gill responded to his tweet with a smiling emoji with hearts. 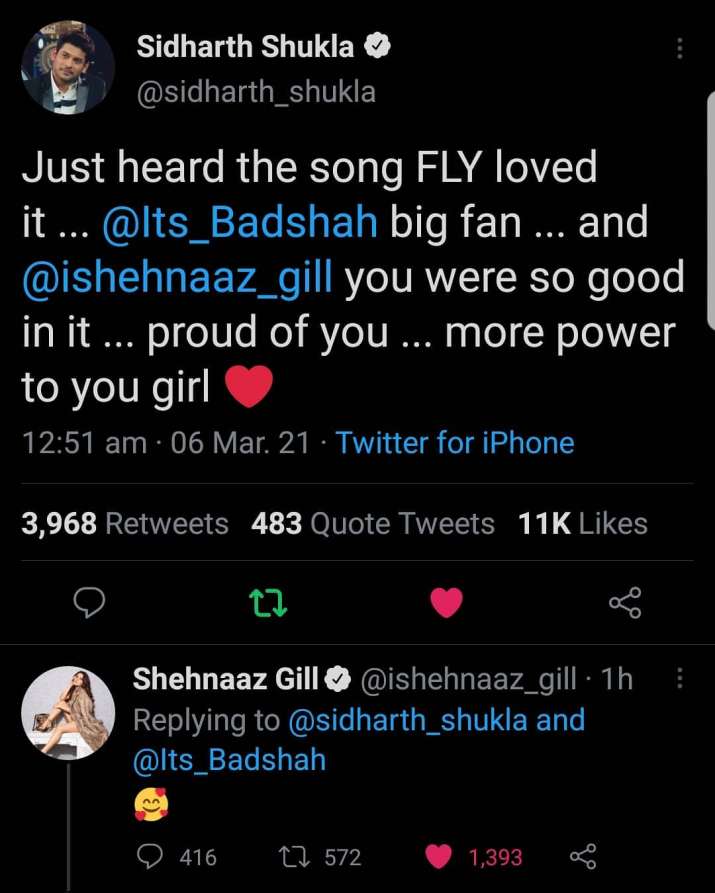 This isn't the first time that Sidharth complimented Shehnaaz for her music videos. Earlier, when the diva featured in singer Arjun Kanungo's song Waada Hai, he has taken to Twitter and said, "Hey @ishehnaaz_gill looking good in Waada hai nice song .... way to go girl." To this, Shehnaaz had said, "Thank you @sidharth_shukla" with a kissing face emoji.

On the other hand, even Shehnaaz never leaves a chance to praise beau Sidharth Shukla for his projects. Remember when Sidharth stepped into the shoes of superstar Salman Khan and turned host for Bigg Boss 14. Shehnaaz appeared to be the happiest with his performance and tweeted, "Loved todays weekend ka waar @sidharth_shukla the way you heard everyone put your point across at the same time you didn't hurt anyone or intrude into their game play was just amazing sira lata"

Meanwhile, Sidharth Shukla and Shehnaaz Gill fans, who call them Sidnaazians, are the happiest with the actors' latest tweets. Expressing the excitement, one fan wrote, "It's funny how seeing you both give me both joy and sadness at the same time." Another tweeted, "Glad you tweeted ....More than the song the fandoms were waiting for your tweet."

On the work front, Shehnaaz Gill is currently in Canada for the shoot of her upcoming Punjabi film Honsla Rakh with Diljit Dosanjh and Sonam Bajwa. Talking about Sidharth Shukla, he will be seen in Alt Balaji's upcoming web series Broken But Beautiful 3. He will be seen playing the role of a play director who is heartbroken.