Along with many unseen photos from the Ramayan sets, actress Dipika Chikhlia's wedding reception photo has gone viral on the internet. Interestingly, the reception was attended by Bollywood superstar Rajesh Khanna as well.

TV actress and politician Dipika Chikhlia, who played the role of Sita in Ramanand Sagar's Ramayan, has been ruling the headlines for her throwback photos. The actress is very active on Instagram and keeps sharing photos from the golden days of Ramayan with her fans. With the re-telecast of the mythological drama on Doordarshan, Dipika has been reliving the fame of the 80s when people used to worship her and actor Arun Govil, who played Ram in the show, thinking they are Ram-Sita. Along with many unseen photos from the Ramayan sets, actress Dipika Chikhlia's wedding reception photo has gone viral on the internet. Interestingly, the reception was attended by Bollywood superstar Rajesh Khanna as well.

The photo going viral on the internet features Dipika Chikhlia from her wedding reception posing with superstar Rajesh Khanna. The actress is looking beautiful in the photo, flaunting a shy smile. Dipika has worked with Rajesh Khanna in many films including Khudai, Ghar Ka Chiraag and Rupaye Dus Karod. Check out the photos here- 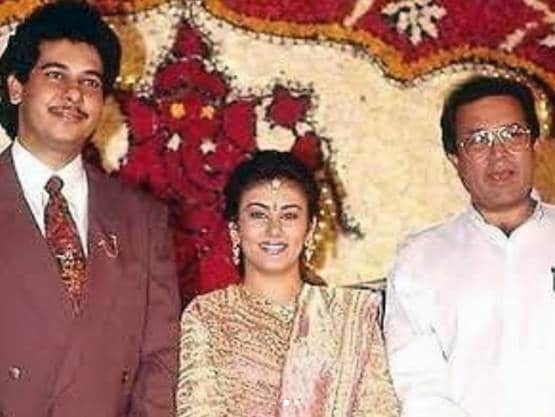 Dipika Chikhlia became a household name after playing the role of Sita in Ramayan. After a successful stint in movies, she joined politics and contested her first elections in Baroda. Sharing a throwback photo with PM Modi and LK Advani from the golden days, Dipika wrote, "An old pic when I stood for election  from baroda now called as Vadodara extreme right is our PM narendra modi ji  nxt to hom was LK Advaniji and me and nalin bhatt in charge of the election."

Along with going down the memory lane, Dipika Chikhlia has been actively urging fans to follow lockdown rules and social distancing. Earlier, she shared a video asking fans to stay indoors and wrote, Dipika Chikhlia wrote, "Agni pariksha ....lets not cross the laxman Rekha" In the video, she urged people to stay indoors and help contain the spread of coronavirus for a bright future. She also requested her fans to take care of their health and strengthen their immunity and fight the infection like a warrior. Dipika also sang praise for all the people from nurses, doctors to policemen for being at the frontline during this pandemic. Check out the video here-

The Ram-Sita vanvaas episode of Ramanand Sagar's Ramayan has already been telecasted on television. Currently, fans are viewing Uttar Ramayan which tells the story of Luv-Kush. With the re-telecast of Ramayan, Mahabharat and other shows from the 80s-90s, fans have been enjoying the classic period of television and coming out with hilarious memes and jokes.

ALSO READ | Ramayan's Lakshman aka Sunil Lahri reacts to memes: I am liking and enjoying it