Kangana Ranaut requested the Maharashtra government to open theatres in the state as her much awaited ‘Thalaivii’ is due to hit the screens.

As Bollywood actress Kangana Ranaut looks forward to the release of her much anticipated film 'Thalaivi,' the actress requested the Maharashtra government to reopen theatres in the state. Based on the life of late Tamil Nadu Chief Minister and former actress J Jayalalithaa, 'Thalaivii' is due to hit the screens on Friday (September 10). Expressing that COVID cases are on the decline, the actress wrote, "Cases in Mahatrashtra have decline. Requesting Maharashtra Government to #OpenUpCinemas in Maharashtra and save the dying film industry and theatres business." 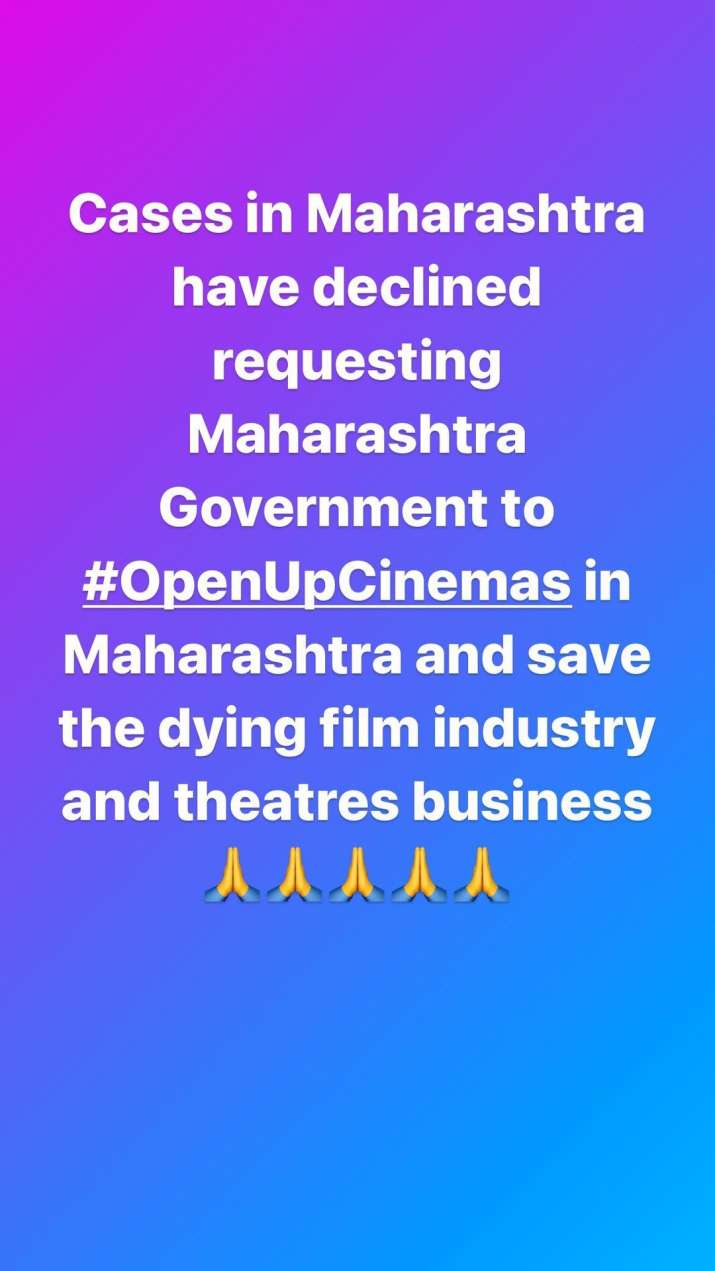 Kangana's starrer showcases varied aspects of Jayalalithaa's life, tracing her journey as an actress at a young age to becoming the face of Tamil cinema as well as the rise of the revolutionary leader that changed the course of the state politics.

Recently the actress shared that Multiplex chain PVR had finally given the green light to screen Tamil and Telugu versions of 'Thalaivii' on September 10.  On her Instagram story, she wrote, "Multiplexes have different rules when it comes to big heros films, they released Radhe simultaneously on ott and theatres. They have released Master with 2 weeks window, releasing Hollywood movies with simultaneous OTT release in US, but refusing to screen even the South of THALAIVII which have a 4 weeks window. @pyrcinemas official @inoxmovies the system makes sure that no woman rises and then complains why don't we have women superstars bringing audiences to theatre on her own like men do..."

She posted an excerpt from PVR's statement on her Instagram that read, "Thalaivii is one of the most keenly awaited films. Also, Ms Kangana Ranaut's acting prowess and exceptional box office pull are well-established facts. We are thankful to Thalaivii team for offering a four-week theatrical window for its Tamil and Telugu language versions."

"We are delighted to be able to play Thalaivii in Tamil and Telugu language at our cinemas, however, we are disappointed that for the Hindi language version, Thalaivii team has decided to offer only a 2 week window. We would like to appeal to Ms Kangana, Mr Vishnu Induri II Mr Shailesh Singh to keep a uniform window of 4 weeks across all language versions and therefore allow all cinemas across the country to showcase Thalaivii to audiences, on the big screen. Our best wishes to the Thalaivii team!," the statement concluded.

'Thalaivii', presented by Vibri Motion pictures, Karma Media Entertainment and Zee Studios in association with Gothic Entertainment and Sprint films, has been produced by Vishnu Vardhan Induri and Shailesh R. Singh and co-produced by Hitesh Thakkar and Thirumal Reddy with Brinda Prasad as creative producer.