Samsung Galaxy Note 10 Lite Review: If you have ever used a Note, you'll love this one

Samsung Galaxy Note 10 Lite brings the premium experience without breaking the bank. But should you get one? Find out in our review

If you are looking to buy the best Android smartphone, one of the options you will come across will be the Samsung Galaxy Note 10. While the features of the smartphone will be as fascinating as it gets, the price tag would make you take a step back. In the huger for getting that S-Pen but not shelling a lot of cash, you might end up selecting an older Note device. However, you will miss out on a ton of features that you could get only if you bought a phone from 2020. Samsung is looking to solve this problem with the launch of the Samsung Galaxy Note 10 Lite.

Samsung Galaxy Note 10 Lite basically bridges the gap between a mid-range Samsung Galaxy A series smartphone and the premium Samsung Galaxy Note lineup. The phone not only brings the S-Pen capabilities but also offers an immersive Infinity O display and an in-display fingerprint scanner. In order to make the offer more intriguing, Samsung has also slapped in a 3.5mm headphone jack and features like Samsung Pay, 25W SuperFast charging and much more.

In its road to offering such amount of features while keeping the price point in check, the company had to make its fair share of compromises. These compromises range from the lack of wireless charging to the addition of a new material at the back called "Glasstic" (made by fusing glass and plastic together). Are these compromises too much or is it hitting the right spot? Let's find out in our in-depth review of the Samsung Galaxy Note 10 Lite.

Samsung Galaxy Note 10 Lite sports a 6.7-inch Super AMOLED Infinity-O display with a resolution of 2400x1080 pixels. The smartphone is powered by the Exynos 9810 processor coupled with up to 8GB of RAM. The dual-SIM handset comes with 128GB of onboard storage, which is further expandable up to 1TB using a microSD card. All of this is backed by a 4,500mAh battery, which comes with support for 25W SuperFast charging.

On the optics front, the Samsung Galaxy Note 10 Lite features a 12-megapixel triple camera setup at the back consisting of a primary sensor, a telephoto lens and an ultrawide camera. For selfies, the smartphone comes equipped with a 32-megapixel selfie shooter.

Samsung Galaxy Note 10 Lite comes in three colour variants - Aura Glow, Aura Black and Aura Red. The variant we received for review was the Aura Glow colour variant. The colour variant looks interesting as it flaunts a rainbow effect when light is directly thrown on it. The back of the smartphone looks like it is made out of glass and at first look anyone can be fooled. Not only on the first look but also while having a hands-on experience, the user will feel that the phone feels as premium as phones like the Galaxy Note 10 or the OnePlus 7T. However, the truth is that the material used here is glasstic, which is basically a term used for the material made by fusing glass and plastic together. 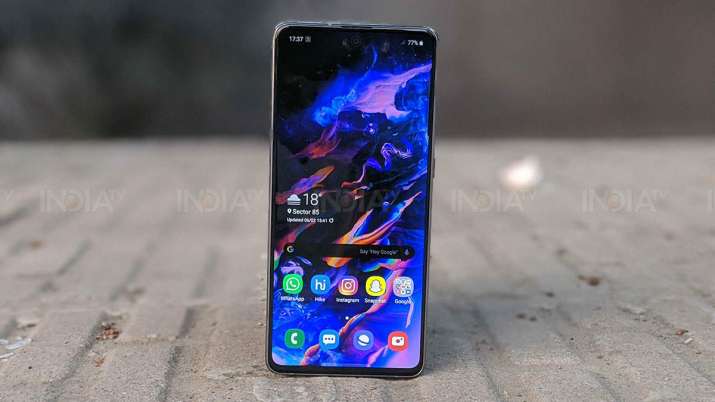 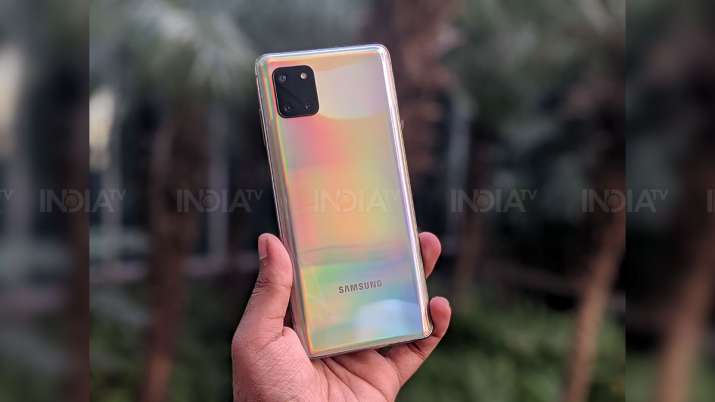 As far as the placements are concerned, the Samsung Galaxy Note 10 Lite features the power button on the right edge alongside the volume up and down keys. On the left, you will find the SIM tray, which can house either two SIM cards or one SIM card and a microSD card. While the top edge holds the secondary microphone, the bottom edge is occupied by the primary microphone, speaker grille, USB Type-C port and the 3.5mm headphone jack.

Samsung Galaxy Note 10 Lite is powered by the Exynos 9810 chipset. The processor is now almost two years old as the first smartphone to feature the 9810 chip was the Samsung Galaxy S9 series. While the chip has aged a bit, the performance is still better than most mid-range chipsets available. Going in with an old chipset is obviously questionable but it brings great performance without breaking the bank. The Galaxy Note 10 Lite performed quite decent in our benchmarks, which we ran on multiple apps including AnTuTu, GeekBench, 3D Mark as well as PC Mark. 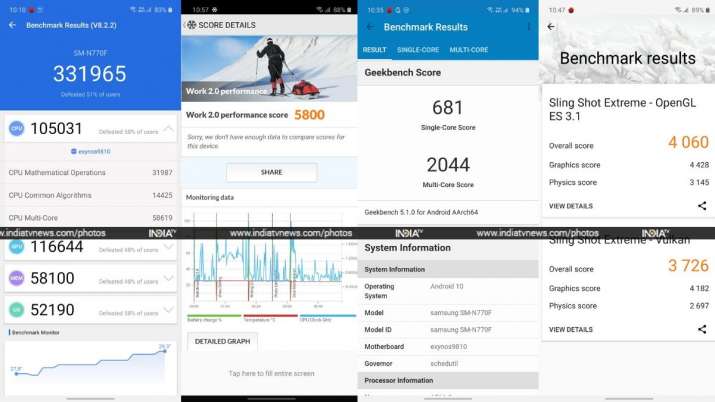 In AnTuTu, the Note 10 Lite got a respectable 331965 whereas PC Mark recorded a Work 2.0 performance score of 5800. GeekBench measured both single-core and multi-core performance where the phone scored 681 and 2044 respectively. We also took a benchmark test using the 3D Mark app and the Note 10 Lite got a decent 4060. As for the real-world usage, the phone felt quite snappy and I did not notice any lag or jitters during my experience. I even played games like PUBG: Mobile, Call of Duty: Mobile and Asphalt 9: Legends on the Galaxy Note 10 Lite. The games ran pretty smooth with high graphics settings.

As far as the software is concerned, the Samsung Galaxy Note 10 Lite runs on Google's Android 10 operating system with the company's custom skin, OneUI 2.0 layered on top. While the skin does bring a ton of exciting features onboard, it does offer slower animations when compared to stock Android. However, the company has now provided an option called "Reduced Animation" in the smartphone's settings, which can make a significant difference in terms of the overall smoothness of the UI. Also, I did notice that the in-display fingerprint scanner is slower than the OnePlus 7T. Not only slower but at times the phone refuses to recognize my fingerprint and most of the times I ended up relying on the face unlock method. 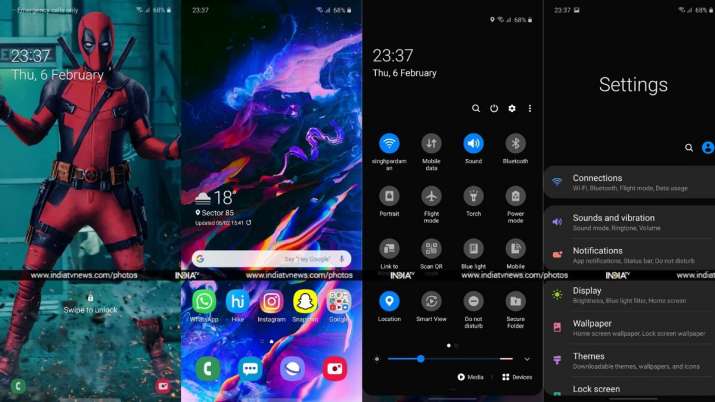 One feature that I absolutely love about Samsung devices is the Samsung Pay feature. While some mid-range phones do not get the full functionality, the Note 10 Lite does get the full-fledged version with MST support, which means I can use the Note 10 Lite to make payments at any stores that have a credit/debit card machine. Apart from that, Samsung has also added plenty of other useful features that take the functionality of the S-Pen to a whole different level. One such feature is the ability to jot down your notes on the Always-on Display. 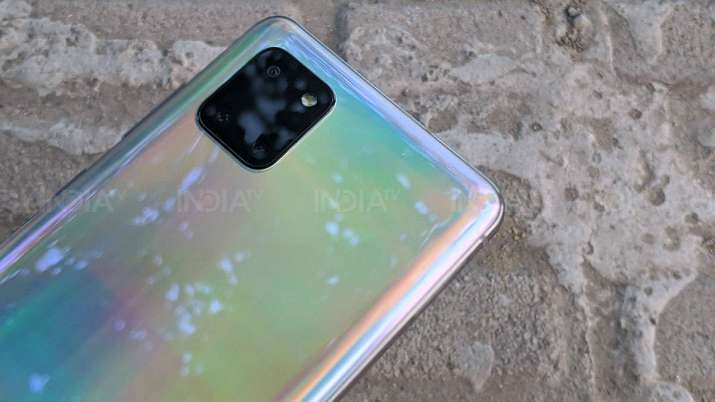 The camera setup can allow you to take some great detailed shots. The images, at times, do tend to get overexposed but most of the times it takes decent pictures at both good and bad lighting situations. As for the colours, they tend to pop a little but that helps in making some shots look better. Unlike the OnePlus 7T, the Galaxy Note 10 Lite does not get a dedicated night mode. The mode switches on automatically when it detects a darker environment.

As for the selfies, the images are mostly well detailed, thanks to the 32MP selfie snapper. However, the images tend to look a bit patchy on a closer look. The front camera even offers a wide-angle mode where you can fit your whole friends group in one selfie.

Samsung Galaxy Note 10 Lite comes with a 4,500mAh battery under the hood. During my regular usage, the phone was easily able to last one full day and at most times I ended the day with approximately 25-30 percent juice still left. My typical usage includes scrolling through multiple social media platforms, listening to music, watching a couple of videos and playing games for almost half an hour with Wi-Fi, 4G and Bluetooth turned on at all times. And when I needed to top up the battery percentage, the 25W SuperFast charger included in the box came to my rescue. While the charger is faster than the normal 15W chargers we have seen with phones like the Galaxy S10, it is still slower than the 30W Warp Charger that comes with the OnePlus 7T. 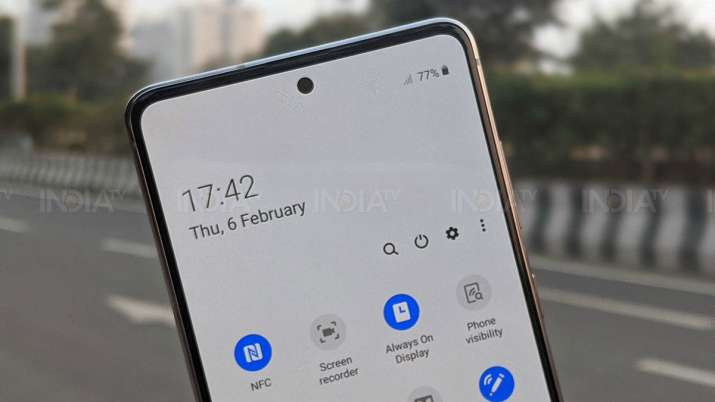 Samsung Galaxy Note 10 Lite aims at bringing the true premium flagship experience that one wants to get without shelling a lot of cash. The smartphone is made for a more mature set of users who are focused on productivity rather than media streaming or gaming. While Note users will definitely appreciate the existence of the S-Pen, users new to the Note world will also get used to features like the S Pen Remote, AR Doodle, Live Message and more. In order to offer such features, the company did have to make a couple of compromises. But one can let these compromises pass in exchange for the ultimate Samsung Galaxy Note experience at a price of Rs. 38,999.

In a nutshell, if you are looking to get the best flagship experience at a budget, the Galaxy Note 10 Lite is currently one of the best smartphones you can get. However, if you are less on the productive side and often lean towards gaming, then you should probably go in with the OnePlus 7T or the Asus ROG Phone 2.