After Sushant Singh Rajput's untimely demise, Bigg Boss 13 contestant Shehnaaz Gill took to social media to share an inspiring post that spoke about how everyone should fight the battle of life courageously.

The untimely death of Bollywood actor Sushant Singh Rajput has sent shockwaves into the country. Both the television as well as the Bollywood industry could not believe that the 'Kai Po Che' actor committed suicide at his Bandra residence on June 14. Ever since the shocking piece of news came, many of his colleagues, friends, and fans came forward and spoke their minds and heart out about the importance of mental health. For the unversed, the actor was suffering from depression and was also undergoing treatment at the Hinduja hospital. Everyone has been talking about how talking about depression is the need of the hour. In the wake of the same Bigg Boss 13 contestant and Punjabi singer Shehnaaz Kaur Gill took to her social media handle to share her thoughts.

Shehnaaz who was one of the most popular contestants if the season shared an inspiring post on Instagram which spoke about how everyone should fight their battle of life courageously. She even wrote how everyone should stay connected and be with each other both in the good and the bad times. Shehnaaz's Insta post read, "Duniya Mein sukh ke sath dukh bhi hai. hume unka himmat se samna karna chaiye. baagna nai chaiye. hum chale jate hai aur usse bhi jda dukh apno ko de jaate hai #stayconnected."

This translates into, "There's happiness as well as sorrow in the world. We should fight everything with courage and be brave-hearted. We should not run away or escape from unpleasant situations, but rather brave them and rise back as a winner. When we give up on life by taking drastic steps, it frees our soul, but we leave our loved ones devastated and disheartened." 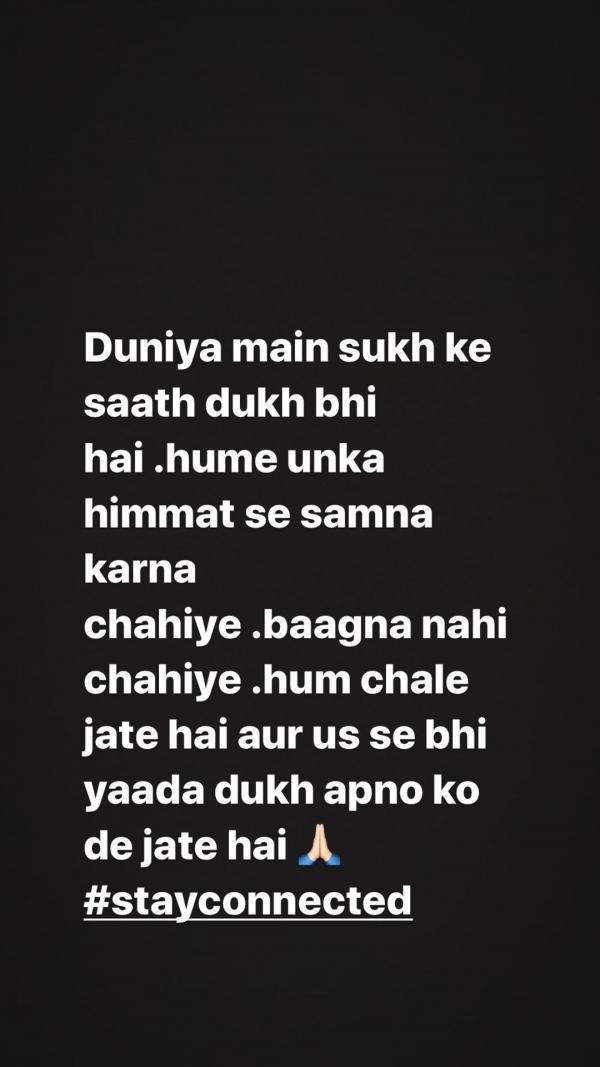 Coming back to Sushant, he was widely known for his role of Manav he played in Balaji TV soap Pavitra Rishta. Later, he made his Bollywood debut with Abhishek Kapoor's Kai Po Che! in 2013 and went on to do films like Shuddh Desi Romance, Detective Byomkesh Bakshy!, MS Dhoni: The Untold Story, Kedarnath, etc.

His mortal remains were laid to rest on June 15 at Pawan Hans crematorium in Mumbai in the presence of his father KK Singh and other close family members and friends. Some industry friends like Rhea Chakraborty, Shraddha Kapoor, Kriti Sanon, Vivek Oberoi, Rajkummar Rao, Rithvik Dhanjani, Krystle D'Souza, and others were also present at the funeral.