Erica Fernandes, Hina Khan's Instagram banter is a proof that there was no cold war at all!

There were reports that Hina Khan and Erica Fernandes don't get along well, however their recent pool party pictures have a different tale to tell.

Kasautii Zindagii Kay 2 actresses Hina Khan and Erica Fernandes are not two jealous actresses as the reports claimed to be. In fact, recently Hina Khan, Erica and Pooja Banerjee were spotted enjoying a pool party after wrapping up Kasautii shoot. The pictures were going viral on the internet and any kind of animosity between Hina and Erica was not seen in them. They were quite comfortable with each other, as colleagues would ever be. Recently, Hina Khan shared a gym picture just before heading out for Cannes International Film Festival 2019. She wrote, "That last painful rep. And the satisfaction on my face post that..Be the girl who decided to go for it."

That last painful rep. And the satisfaction on my face post that..Be the girl who decided to go for it💪 #GymSwagger #Goals #Cannes2019 #GettingTheir #NewChapter #ThankyouGod #Peace #FitGirl #GymFashion @victoriasport

To this, Erica Fernandes dropped a comment writing, 'show off' followed by a laughing emoji. We're sure that Erica just meant to pull Hina's legs by saying so. Although, the former Bigg Boss contestant didn't take offence of her comment and replied, "show off, Flaunt, impress, set gashin goals, whatever suits you eri baby…kissi.” 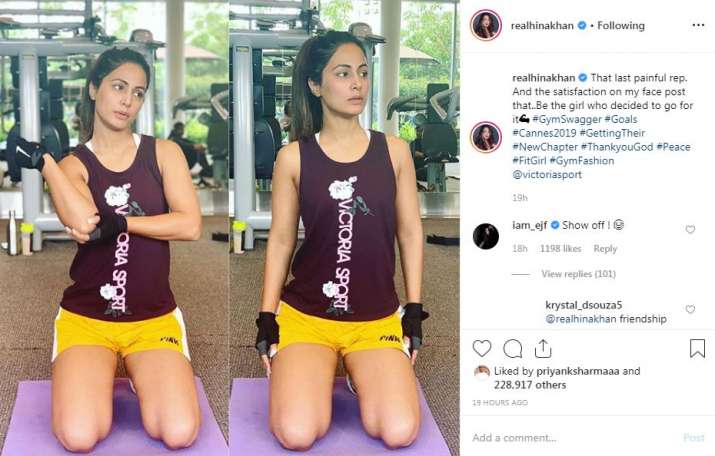 Hina Khan took the comment sportingly, which left her fans in awe.

A couple of days ago, the Kasautii girls Hina Khan, Erica Fernandes and Pooja Banerjee were seen enjoying dinner date together. It seems like the leading ladies of KZK 2 are getting along well together.

On a related note, Hina Khan will not be seen in Kasautii Zindagii Kay 2 soon. She will shoot for her last episode by the end of first week of May. She will be then heading to Cannes International Film Festival where she will unveil the first look of her Bollywood debut film Lines. After that, she will prepare for her Vikram Bhatt film where she will play the role of an editor of a fashion magazine. In the upcoming episodes of Kasautii Zindagii Kay 2, Komolika will stage her own death. She will return later to exact her revenge on Anurag and Prerna.