Don't forget to notice Sonam Kapoor's comment on the picture.

Sonam Kapoor is a style icon of Bollywood and she has to thank her sister Rhea for this. Needless to say, they are the most fashionable sister duos in the industry. Rhea Kapoor is Sonam Kapoor’s stylist and she has created a masterpiece of her on various red carpet events. On Sunday, Rhea shared a throwback picture with sister Sonam Kapoor on her Instagram account. In the picture, both Rhea and the PadMan actor were clad in the fashionable attires that were all rage back in the 2000s.

Sonam Kapoor is spotted wearing a diamond stud bindi paired with a black tank top. She is wearing a straight fit jean which became a massive hit among the youngsters during that era. Her sister Rhea Kapoor is wearing a Calvin Klein crop top with a bell-bottom jean. Her blunt cut hairstyle remind us of days when this hairstyle was all the rage among the youth.

90s babies. OGs. When you instafamous before the gram.

Sonam Kapoor spotted the picture and dropped a comment, which seemed rather hilarious to us. She wrote, “@rheakapoor please look at my diamond bindi." 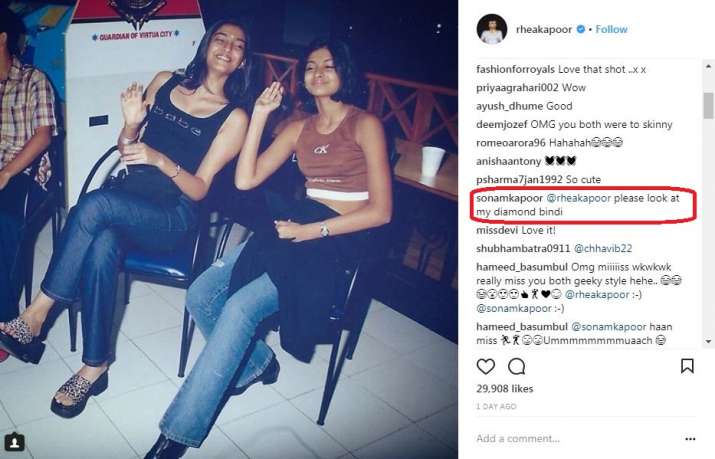 On the work front, Sonam Kapoor will soon be seen in Akshay Kumar’s PadMan. The film is bankrolled by Akshay’s wife Twinkle Khanna. The movie has been helmed by R Balki and also stars Radhika Apte in an important role. It is scheduled to release on February 9, 2018.

She will also star in Shashanka Ghosh’s Veere Di Wedding with Kareena Kapoor Khan and Swara Bhaskar. The movie is slated to release on June 1, 2018.

Recently, Sonam Kapoor has wrapped the shooting for Rajkumar Hirani’s Dutt biopic. It will be her second venture with Ranbir Kapoor after Saawariya.