Kareena Kapoor was quick to steal the limelight from her Ki & Ka co-actor Arjun Kapoor, asking him to set an example before advising his fans.

Actor Arjun Kapoor decided to celebrate four years of Ki and Ka with advice for his male fans, asking them to help women in household chores much like he was seen doing in the rom-com. The country is in lockdown until April 15 and Arjun wanted men to utilise their time well by contributing to the household chore with their wives.

However, Kareena Kapoor was quick to steal the limelight from her co-actor. She savagely trolled Arjun, asking him to set an example before advising his fans.

“Hey, I hope all Ki & Ka s are at home staying safe and washing their hands often !!! I’m also sure all the ‘Kas’ are splitting all household chores and duties with their ‘Kis’ right now at home...Why don’t you guys send me your videos/pictures of you doing household chores using #4YearsOfKiAndKa and tag me on your posts/stories and I’ll repost them,” Arjun captioned the video on Instagram.

Kareena came up with a hilarious comment, saying: “First I want to see you do your household chores on the gram... Then others will follow.” Arjun accepted the challenge saying, “Waah. Done deal.” 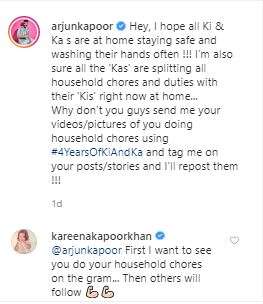 Ki & Ka, directed by R Balki attempted to break gender stereotypes. The 2016 film revolved around Arjun’s character, who takes the charge of the homemaking while his on-screen wife played Kareena is focussed on her career.