Released in 2014, Happy New Year was the second-highest grosser of that year.

Shah Rukh Khan starrer Happy New Year completed five years of its release today. On this occasion film's director, Farah Khan took to her Instagram to share a throwback picture of the star cast and thanked Shah Rukh Khan and Red Chillies Entertainment for their support during the shoot of the project. Sharing the picture, Farah wrote,  Can’t believe its #5yearsofhappynewyear was an exhilarating ride with my most favourite people.. #indiawaale Thank you @iamsrk @redchilliesent for spoiling me so thoroughly..’

Farah also shared pictures of the film's cast on her Instagram story. In one story Farah posted a monochromic picture in which Shah Rukh Khan, Boman Irani, Deepika Padukone, Abhishek Bachchan, Sonu Sood, and Vivan Shah can be seen posing with Farah Khan. 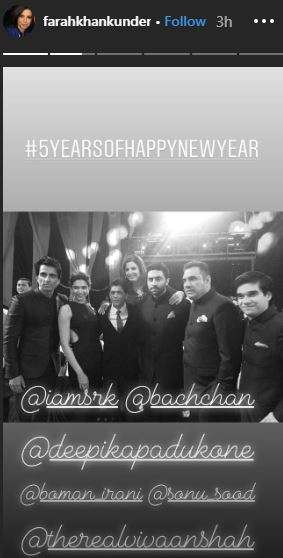 In another story, the film's star cast poses with Google's Sundar Pichai at the Google headquarters. 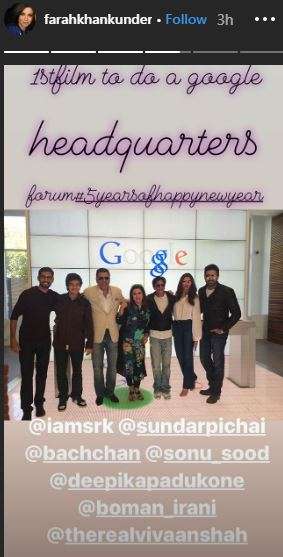 The film which was released in 2014 received commercial success and became the second-highest grosser of the year despite receiving flak from critics.

On the work front, Choreographer turned filmmaker Farah Khan will next be collaborating with Rohit Shetty for the remake of 'Satte Pe Satta' in which Hrithik Roshan will essay the lead role which was played by Amitabh Bachchan in the original film.