Latest Bollywood News and Updates December 27: Bollywood Bhaijaan Salman Khan turned 53 today and it was time for never-ending celebrations. He rang into his birthday by cutting a cake with nephew Ahil Sharma while the big names of Bollywood like Anil Kapoor, Sonakshi Sinha and others sang Happy Birthday for him. On the other hand, Bollywood diva desi girl is still not over the memories of her dreamy wedding and shared a picture showing what husband Nick Jonas had written on his hand with henna. Also rumoured couple Farhan Akhtar and Shibani Dandekar enjoyed their Christmas dinner with sister Anusha and Karan Kundra. Have you seen their pictures yet?

Bollywood superstar Salman Khan has turned a year older today. The Bhaijaan of Bollywood who is currently riding high as the super cool host of Bigg Boss 12, is all set to wow his fans with his upcoming film Bharat, which is all set to release on Eid 2019. Last seen in the big screens in Race 3,  Salman Khan is undoubtedly the king of box-office and, especially his Eid releases are something that the audiences always looks forward to. His connection with Eid release all started with the 2009 film Wanted and, rest is all history.

On the special occasion of Salman Khan's birthday, a look at his blockbuster Eid offerings that not only smashed box-office records but also won hearts of the audience.

Fans can’t keep calm as everyone’s favourite Salman Khan turns 53 today. The celebrations have already begun at his Panvel farmhouse since last night where all the big names from Bollywood were present to shower their love and wishes on him like Anil Kapoor, Sanjay Leela Bhansali, Kriti Sanon and others. While Salman cut his birthday cake with the media outside his farmhouse, now an inside video has popped on the internet in which Salman is seen cutting his birthday cake with nephew Ahil Sharma in his arms.

The video shared on social media has superstar Salman khan celebrating his birthday with family and friends.  In the video, Salman is seen cutting the cake with Arpita Khan Sharma and Aayush Sharma's son Ahil while his rumoured girlfriend Iulia Vantur sings Happy Birthday to him along with other guests. Salman is seen donning a black T-shirt and denim and looks adorable. The actor’s bodyguard Shera is also seen in the video enjoying the celebrations. Watch the video here-

Here comes a picture that proves Nick Jonas' love for Priyanka Chopra knows no bounds. While it's more of a choice than a ritual for a bride to write her to-be husband's name on her wedding Mehendi, the American singer was willing enough to go a step ahead. If PeeCee and Nick's numerous wedding pictures from their royal ceremonies in Jodhpur, India weren't enough to make you blush, here's the latest one that will baffle all future husbands and boyfriends. Imagine a groom writing his bride's name as a shloka which further proves how much he worships her in his life. Too much, eh? Well, not for Nick Jonas at least.

While Priyanka's Mehendi may or may not have had Nick's name written on it, he ensured he had. A recent picture shared by PeeCee on her Instagram story proves Nick's devotion towards her and why it can't be even.

The Jumanji actor had 'Om Priyankay Namah' written on his hand for his wedding functions and it meant that he worshipped her. Its literal meaning is adoration to Priyanka and we don't know how to react to it. Yes, it's too loving and emotional but we wonder if God was so unfair to present her with the best man in this entire world. 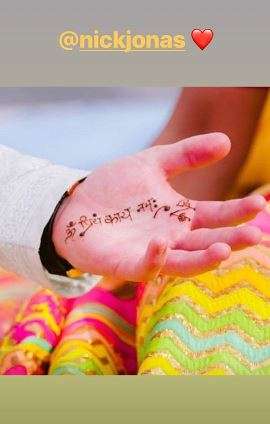 Among many Bollywood love affairs that popped in 2018, the most adorable one id of Farhan Akhtar and Shibani Dandekar. The duo not just look cute together but also stand for each other whenever required. After attending Katrina Kaif’s Christmas party, the couple celebrated the happy occasion with Shibani’s sister Anusha Dandekar and her boyfriend Karan Kundra along with some other close friends.

Since these two Dandekar sisters were away from their home, they decided to celebrate Christmas together with their other family i.e. their close friends. In the pictures shared by Anusha Dandekar on her social media, Shibani and Farhan are seen sitting together and enjoying the Christmas dinner. The lovestruck is even posing for the camera. Check out the picture here-

movie directed by Meghna Gulzar, Deepika will be seen romancing Vikrant Massi. He will be playing Laxmi's partner Alok Dixit in Chhapaak and reveals that he is excited to start working on the film.

Talking to Hindustan Times about Chhapaak, Vikrant said, "All this is very heartwarming. I am really looking forward to beginning the year with Chhapaak in March and a couple of other films that go on floors but it’s a little too premature to talk about them now."

A few days ago, Vikrant Massey had tweeted about being a part of the film and his excitement on working with Meghna and DP. He tweeted, "Honoured to be part of #Chhapaak! Thank you @meghnagulzar Ma’am for giving me this opportunity & believing in me. Looking forward to working with the supremely talented @DeepikaPadukone." Deepika Padukone replied to his tweet, "Welcome to the team @masseysahib !!!Thrilled to have you on board!!!"

Looks like the wedding season was not yet over in the glamour world! After the dreamy weddings like that of Sonam Kapoor - Anand Ahuja, Priyanka Chopra - Nick Jonas and Ranveer Singh - Deepika Padukone, celebrated columnist and journalist Suhel Seth also tied the knot with his long-time girlfriend and model Laksmi Menon. He got hitched in a private wedding ceremony on Christmas at his Gurugram residence.

According to the reports in Mumbai Mirror, one of the invitees talked about the ceremony and said, “It was a quiet, genteel affair, and the guests were people who are close to Suhel and who he counts as friends.” The wedding was attended by family and close friends, which includes Praful Patel, Jay Panda, Amar Singh, Muzaffar Ali, Tasneem and Vikram Mehta, Tarun Tejpal, Sheila Dixit and many others. Talking about Suhel, apart from being a columnist, brand consultant, entrepreneur and writer, he has acted in films like Calendar Girls, Zindagi Na Milegi Dobara, Guzaarish and Rog.

Suhel Seth has been making the headlines for some time recently when models like Diandra Soares and others accused him sexual misconduct as the part of the ongoing #MeToo movement. Talking about Suhel, Diana had earlier said, "I was dancing on a couch and out of nowhere Suhel Seth shoves his f*****g tongue down my mouth. I immediately bit his tongue and bit it really really hard with all my might and anger.”