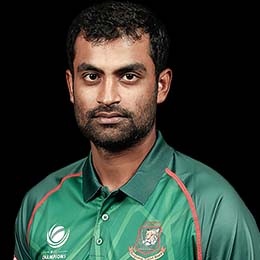 When the fans discuss aggressive openers, people immediately remember Virender Sehwag, Sachin Tendulkar, Sanath Jayasuriya and many more, but the same aggression and attitude can be seen in Bangladesh's Tamim Iqbal. This Bangladesh player made the 2007 World Cup squad after playing two ODIs for Bangladesh. He rose to fame when he hammered India and took on Zaheer Khan in tricky conditions. The southpaw has scored over 4,000 runs in Test cricket which include 8 tons, one double ton and 25 fifties in 56 Tests he has played. In the shorter formats, Tamim has played 183 ODIs for Bangladesh, where he has scored over 6,000 runs, which includes 11 centuries. He also has a ton in T20I cricket and has smashed over 1500 runs in 72 T20Is played. 2016-17 saw a rise of Bangladesh in Test cricket and Tamim has been an integral part of the team.