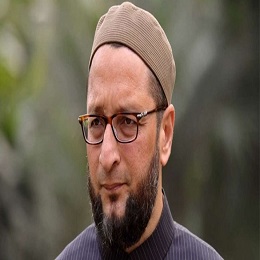 Born on May 13, 1969, Asaduddin Owaisi is an Indian politician, who is the President of the All India Majlis-e-Ittehadul Muslimeen. He is a three-time Member of Parliament (MP), representing the Hyderabad constituency in Lok Sabha, the lower house of the Indian Parliament. Owaisi made his political debut in 1994 in the Andhra Pradesh Legislative Assembly election. Contesting from the Charminar constituency which his party has been winning since 1967, he defeated his nearest rival a breakaway party Majlis Bachao Tehreek's candidate by a margin of 40 thousand votes. In 2004 election, he was succeeded by Syed Ahmed Pasha Quadri as the member of the Assembly from the constituency. The All India Majlis-e-Ittehadul Muslimeen (AIMIM) will contest only eight seats in Hyderabad out of the total 119 in the forthcoming Telangana elections, a senior party leader said on condition of anonymity.