Dia Mirza who got married to Vaibhav Rekhi in February is expecting her first child. The duo sometime back along with their daughter Samaira Rekhi went to the Maldives and filled Instagram with stunning pictures. Yet again, another one has been shared by the actress depicting how the mommy-to-be's 'Work from home' looks these days.

The COVID-19 pandemic has yet again left people indoors. Amid the hour of tension and crisis, various celebrities are doing their best to keep everyone motivated and one amongst those is Dia Mirza. Counted amongst one of the most active celebs on social media, Dia is doing it all to spread positivity and help people to cope up with anxiety apart from sharing details about blood plasma availability. The actress who got married to Vaibhav Rekhi in February is expecting her first child. The duo sometime back along with their daughter Samaira Rekhi went to the Maldives and filled Instagram with stunning pictures. Yet again, another one has been shared by Dia depicting how the mommy-to-be's 'Work from home' looks these days.

Taking to the photo-sharing application, Dia posted a sunkissed picture on the stories section in which she was seen wearing a beautiful floral outfit and minimal make-up. Alongside the beautiful selfie, the actress posted a sticker that read, "Work from home."

Have a look at her picture here: 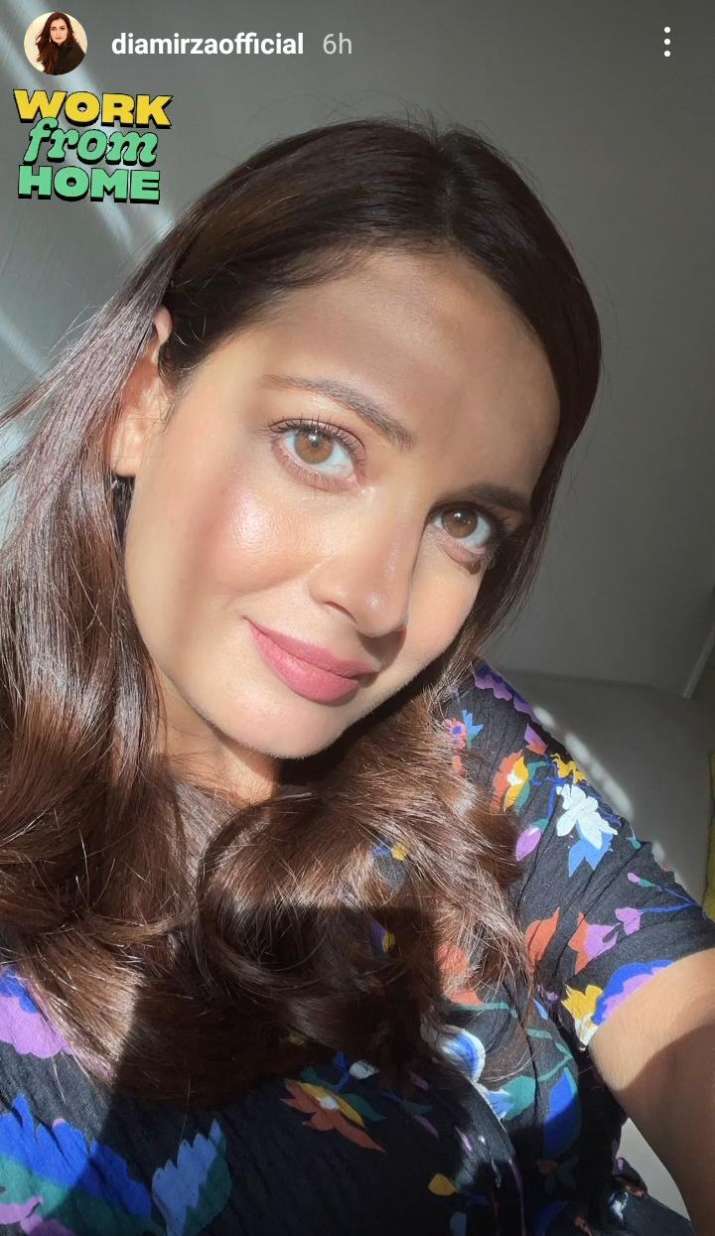 Did you notice that pregnancy glow?

Dia sometime back announced the good news of her pregnancy through an Instagram post that included a picture of herself posing infront of the son while cradling her baby bump. In the caption, she wrote, "Blessed to be...One with Mother Earth...One with the Life Force that is the beginning of everything...Of all stories. Lullabies. Songs. Of new saplings. And the blossoming of hope. Blessed to cradle this purest of all dreams in my womb."

She was criticized for hiding her pregnancy until her wedding with Vaibhav. Responding to the same, the 'RHTDM' actress wrote, "Firstly, we didn’t marry because we were having a baby together. We were already marrying as we wanted to spend our lives together. We discovered we were going to have a baby while we were planning our wedding.

So this marriage is not the result of pregnancy. We didn’t announce the pregnancy until we knew its safe (medical reasons). This is the happiest news of my life. I’ve waited for many many years for this to happen. No way I would hide it for any reason other than medical."

For those unversed, Dia stepped into the acting world with her appearance opposite R Madhavan in Rehnaa Hai Terre Dil Mein in 2001. She went on to act in films like Parineeta, Honeymoon Travels Pvt Ltd, Love Breakups Zindagi and Sanju. Her latest apperance was in Nagarjuna Akkineni and Saiyami Kher starrer Netflix film Wild Dog.