Dilip Kumar tweeted a picture and thanked all his fans and well-wishers for their birthday wishes for him.

Legendary actor Dilip Kumar, who turned 97 on Wednesday, said all the love and affection he has received from fans fills him with gratitude and tears. The actor took to his Twitter to thank his fans and well-wishers for all their wishes on his birthday.

The actor uploaded a picture of himself on Twitter and wrote, "On this 97th birthday, calls and messages have been pouring in since last night-thank you!"Celebrations are not important- your boundless love, affection and prayers have always brought tears of gratitude in my eyes."

Last year, the actor was diagnosed with mild pneumonia. According to his wife Saira Banu, the actor's health is much better now. "He is fine. He is much better. Everyone must pray for him," Saira told PTI.

Fans of the legendary superstar took to their social media accounts to share their birthday wishes for him. Actors Varun Dhawan, Vishan Khatter and thers also shared their wishes for Dilip Kumar on his birthday. Wishing Dilip Kumar on his birthday, Varun Dhawan tweeted, "Happy birthday to the loving legend  #DilipKumar Saab. On this day 97 years ago brilliance was born #aebhai" 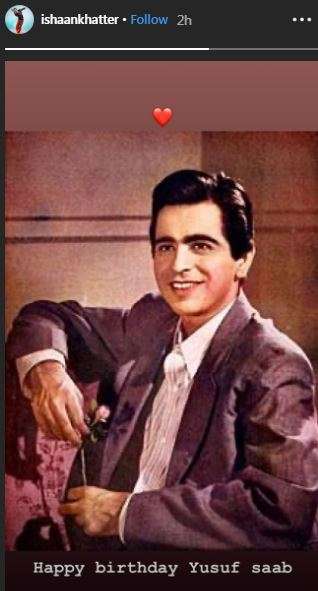 Dilip Kumar, who made his big screen debut with 1944 film "Jwar Bhata", is one of the most celebrated stars of Hindi cinema.

Happy Birthday Dilip Kumar: Mughal-e-Azam to Devdas, iconic movies that you should watch