Ayushmann Khurrana is no doubtedly one of the finest that Bollywood has right now. Not only has he been monumental in bringing a wave of new cinema in Bollywood, he has also made his mark on the Box Office, all while doing full justice to his unconventional characters. Ayushmann's last such movie was Bala that not garnered great reviews from the critics but was a massive hit at the box office, giving Ayushmann the biggest hit of his acting career. Now the actor is all set to wow the audiences again with his next, 'Shubh Mangal Zyada Saavdhan'. The actor has finished shooting for the movie and took to Instagram to announce the news.

Ayushmann on Saturday took to Instagram Story and shared a photograph of a cake on which "'Shubh Mangal Zyada Saavdhan' film wrap" was written. 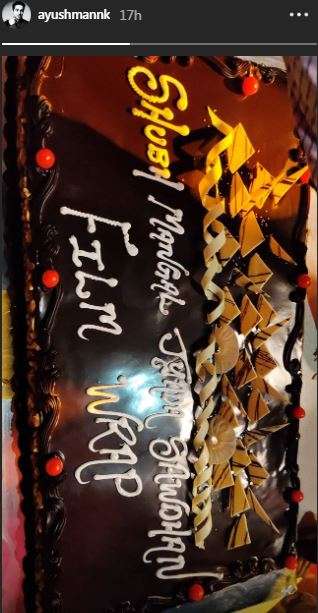 The film is the second installment of the hit film "Shubh Mangal Saavdhan" and is scheduled to release on February 21, 2020.

Directed by Hitesh Kewalya, the upcoming movie, which was mainly shot in Varanasi, revolves around the issue of homosexuality. It also stars Neena Gupta and Gajraj Rao, who earlier shared screen space with Ayushmann in the runaway hit "Badhaai Ho".