The end of Parliament session for the 16th Lok Sabha today ushered in the era of political din in the country as almost two dozen opposition parties gathered in New Delhi to sound poll bugle, even as Prime Minister Narendra Modi counted the achievements of his five-year term in the lower house.

"Whenever fascist powers have tried to capture power, they first destroy democratic institutions. And I am not just taking about CBI, RBI... Institution of Parliament being undermined, bypassing Parliament, minimising its role. It is maximum Modi, minimum governance and minimum Parliament," D Raja said.

"All democratic institutions are under assault," SP leader Ram Gopal Yadav alleged, adding, "We need to identify the elements, who, in partnership with BJP, are trying to weaken Kejriwal and Mamata governments."

The Opposition came together later in the day to set the agenda for general elections 2019. Meeting at the residence of Sharad Pawar, TDP's Chandrababu Naidu, NC's Farooq Abdullah, Mamata Banerjee, Arvind Kejriwal and Congress chief Rahul Gandhi decided to work together with a common minimum programme to fight against the BJP-led NDA in the Lok Sabha polls.

"We will work together to defeat the BJP," Rahul Gandhi told media after the meeting.

Delhi Chief Minister Kejriwal termed the talks constructive and said the opposition will work together. The meeting indicates that the Congress and the Aam Aadmi Party, who have been bitter rivals since the regional party came to power in Delhi in 2015, may forge a tie-up.

Trinamool Congress president and West Bengal Chief Minister Mamata Banerjee called the meeting "fruitful" and asserted that "we will do pre-poll alliance".

Telugu Desam Party head and Andhra Pradesh Chief Minister N Chandrababu Naidu said there is a democratic compulsion to save India while Farooq Abdullah of the National Conferences termed the meeting "good". 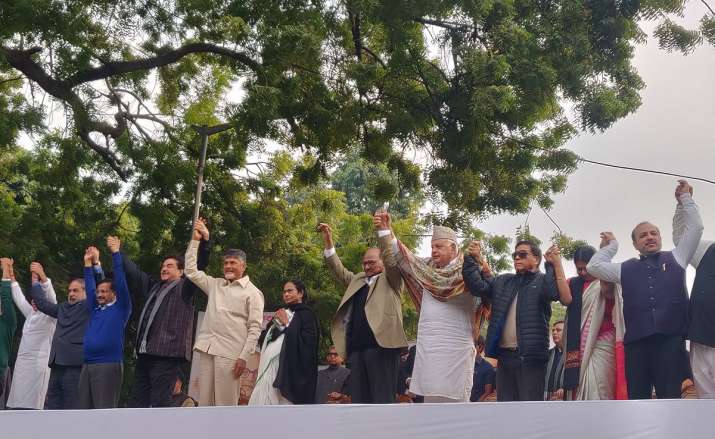 While the Opposition leaders took turns to slam the government, the prime minister took the time to summarise the achievements of his five-year tenure during his last speech in Lok Sabha.

Referring to the achievements of his government, he said, India has become the 6th largest economy and is fast moving towards being a USD 5 trillion economy.

Modi pitched for a majority government, saying the country's image had enhanced globally due to the electoral mandate enjoyed by the current dispensation.

Taking a swipe at Gandhi, who was not present in the House at that time, Modi referred to the hug and "winking" episodes, saying it was a new thing he witnessed as a first time member of Parliament.

The PM maintained that neither he nor External Affairs Minister Sushma Swaraj is responsible for India's enhanced image globally. It is mainly because the country has got a majority government after a gap of three decades, he said, adding the credit goes to the people of the country.

The 16th Lok Sabha passed 203 bills out of 219 introduced, including one on curbing black money, the PM said.

Despite fast-paced political activities recorded through the day, the issue of Rafale managed to dominate the day as the Comptroller and Auditor General of India (CAG) tabled its report in Lok Sabha on the matter.

The report, which largely absolved the Modi govt of any wrongdoing, came as ammunition to the BJP even though Congress refused to lend it the value 'worth paper it has been printed on'.

The CAG report is a cover-up. It ignores the cost of the missing Bank Guarantee & glosses over the suspect costs for "India Specific Enhancements".

But even the CAG couldn't hide that it may take upto 10 yrs. for the 36 RAFALE jets to be delivered!

Gandhi contended that the CAG report on the Rafale deal does not mention the dissent note by negotiators. The government's argument on price and faster delivery of Rafale fighter jets has been demolished, Gandhi said at a press conference.

The only reason for the new deal is to give Rs 30,000 crore to industrialist Anil Ambani, the Congress chief alleged.

The government and Ambani have rejected the Congress' allegations on the fighter jet deal with France.

"The argument given by the prime minister for the new Rafale deal was price and faster delivery. This has been demolished," he said, citing a note by officials. "You say there was no scam, then why are you afraid of ordering a JPC," he said, reiterating his demand for a joint parliamentary committee to look into the deal.

Rafale, it seems, will lead the agenda for the general elections 2019.