India's Saurabh Chaudhary has qualified for the Men's 10m Air Pistol event after finishing first in the qualification event. With a final score of 586, Chaudhary finished at the top of the 36-shooter lineup.

Abhishek Verma, who was also participating in the same event, finished 17th. Verma looked in line to secure his berth in the final event as well, but missed the qualification after scoring 9, 8 and 8 in the final three shots of the sixth series of qualification.

Here's the final list of shooters who have qualified for the final event: 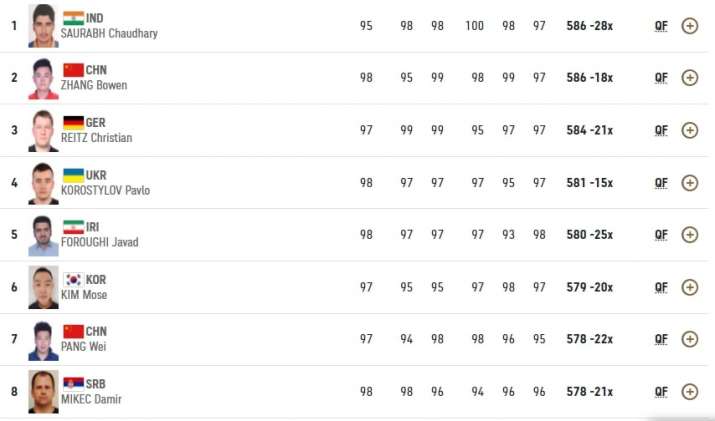 Even as Chaudhary went about his task in his typical composed manner, his roommate and friend Verma, battled hard at the Akasa Range.

Chaudhary, an Asian Games and Youth Olympics gold medallist, started in an excellent fashion, shooting 10 out of 10 before slipping in the second part of the first series.

The 19-year-old multiple World Cup gold-medallist then rallied from the 19th place, in a field of 36, to inch closer to the top eight qualifying spots.

Once inside the safe zone, Chaudhary continued to sizzle and scored a perfect 100 with a 10 out of 10 after back-to-back 98s, making his way up to the top of the highly competitive field comprising multiple world and Olympic champions in Chinese shooters Pang Wei, Zhang Bowen and Serbian Damir Mikec.

Verma started with a 94 and and after being behind, got his act together and continued his march up the leaderboard until two 8s and as many 9s in the last series did him in.

In the 10m air pistol qualification, each shooter fires six series of 10 shots each with the top eight qualifying based on cumulative scores.

Chaudhary and Verma have been by far the two best air pistol shooters in the world over the past three years, with both taking turns to be world number one.