India so far have won all the five games they have played in the World Test Championship and have 240 points, which is 180 more than second-placed New Zealand.

India are already on top of the World Test Championship by a country mile and Bangladesh, haven't started their journey yet. But, if the Bangla Tigers were asked, where would you like to start your campaign? India would have been at the bottom of their list. And, considering India's form at home, they might not even count it in one of their away series. But, it is what it is and Bangladesh are up for an uphill task against a formidable Indian side that just crushed South Africa at home.

Since their exit from the World Cup, Virat Kohli's men have won everything that has come in their way. Barring the T20 series against South Africa, which was drawn, India have whitewashed the Windies and hammered the Proteas in Test cricket and are now 180 points ahead in the WTC table, which has New Zealand in the second place with 60 points.

Bangladesh look up to McKenzie for tips to tackle Ashwin-Jadeja: Mithun

Virat Kohli Is Back: Indian skipper sweats it out in nets ahead of Indore Test

India's bowling has once again been the reason behind their auspicious form in red-ball cricket. India have five bowlers in the list of most wickets in the WTC with Mohammed Shami leading the pack with 22 scalps from 5 games. Along with him, Ravindra Jadeja (19), R Ashwin (15), Jasprit Bumrah (13) and Ishant Sharma (13) are also present in the list.

However, they haven't been a muck with the bat either. In the list of most runs so far in WTC, India have more names. Rohit Sharma is the furthest ahead with 529 runs from 3 games while Ajinkya Rahane (487 runs) and Virat Kohli (453 runs) following him and make the top five with Steve Smith leading the pack with 774 runs from 4 matches. Mayank Agarwal is sixth with 420 runs from 5 games.

India has had a favourable run of games so far. A trip to West Indies and three home Tests against South Africa aren't the best of challenges one would say but nonetheless, their will and determination for victory has helped them push aside opponents, something Bangladesh will be wary of even though they would fancy their chances of causing an 'upset' more than that of the Proteas, who were recently shoved aside by the hosts. 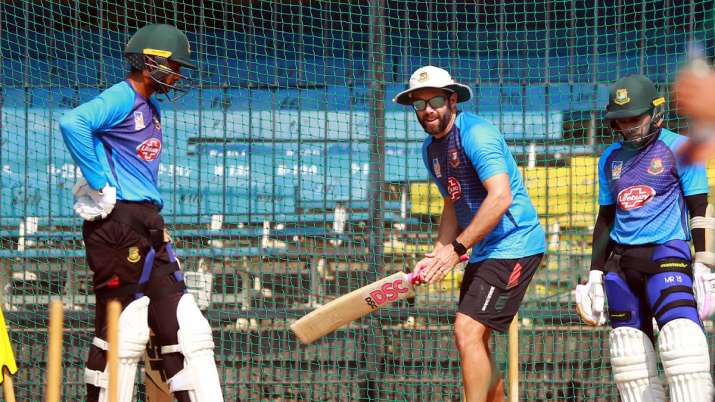 But, it won't be easy for Bangladesh even with their familiarity to sub-continent tracks. With Shakib Al Hasan being banned and Tamim Iqbal also out for personal reasons, a young side led by Mominul Haque would have to play out of their skins to even challenge the Indians on home soil.

A lot will depend on the captain himself, who has been pushed to the role surprisingly after Shakib had to be omitted and added pressure can make matters worse. Mominul, however, has an impressive record in red-ball cricket, scoring 2613 runs from 27 matches at an average of 41.47. Him, along with Mahmudullah, Mushfiqur Rahim and Liton Das will have to shoulder the responsibility of scoring runs while an experienced head in Imrul Kayes is also expected to chip in.

In the bowling department, they have some sting in Al-Amin Hossain, who impressed in the T20Is and Mustafizur Rahman but Test cricket is a different ball-game altogether. In the spin department, Taijul Islam and Mehidy Hasan have the responsibility of exposing some shortcomings that the Indian batsmen have shown lately to spin bowling and can actually change the game for the visitors if they can persist with their line and length consistently.

Bangladesh, however, can aim to use one thing to their advantage -- the Day-Night Test in Kolkata. Both teams will be playing their first pink-ball Test in Kolkata, starting November 22 and India's batting frailties against the moving ball are well documented. With Ajinkya Rahane accepting that the pink ball does way more in the air than the red cherry, early wickets and in-roads into the middle-order could expose India and a hopeful batting collapse can be the only way out for Mominul and his team.

India, on their part, would be well confident to deal with the movement with everyone barring Virat Kohli already facing the pink-ball in domestic cricket over the last three years. However, a little change in strategy could take place with the hosts going in with just spinner and more pace options in Kolkata due to the pink ball moving more and dew coming in later in the day, which makes it increasingly difficult for spinners to grip the ball.

Overall, India go into the two-match affair as favourites but Bangladesh will have their chance to redeem themselves and prove a point by playing some quality cricket which they are capable of but if they don't, India's tally should stand at 360 from 7 games.