Surya Grahan 2019: First solar eclipse of the year today. All you need to know about time, locations

During a partial solar eclipse, the Moon covers the Sun’s disk only partially, which is why it is called Partial Solar Eclipse and not a total Solar Eclipse.

Total Solar Eclipse 2024: All you need to know about biggest celestial event of 21st century

The partial solar eclipse was not be visible in India, but from locations in North Pacific and Northeast Asia. Locations where it was visible include China, part of Siberia in Russia, Korean peninsula, and Japan.

Some of the best positioned cities to see this solar eclipse or Surya Grahan 2019 were Taipei in Taiwan, Yakutsk in Russia, Adak in Alaska, Tokyo in Japan and Seoul in South Korea. 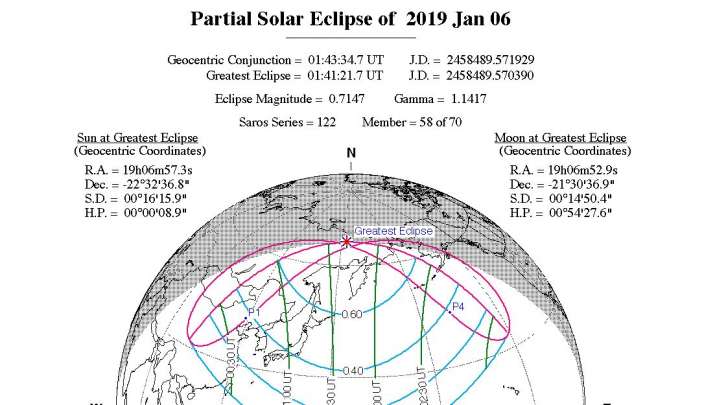 What is a partial solar eclipse?

During a partial solar eclipse, the Moon covers the Sun’s disk only partially. The Moon, the Sun and Earth don’t align perfectly in a straight line, which is why it is called Partial Solar Eclipse and not a total Solar Eclipse.

It is deemed advisable to have food prior to eclipse or after it is complete. The bacteria tend to get active, in the absence of sunlight, which could further prove detrimental for health. Cooking should also be avoided during this period.

Solar eclipses are often considered inauspicious as the sun is not clearly seen. People generally avoid cooking, eating or drinking or going outdoors during the solar eclipse. To "ward off" evil effects of the solar eclipse, some also take bath to purify themselves.

The eclipses are often believed to be dangerous for pregnant women and their unborn babies. Thus, they are advised to not step out during the solar eclipse.