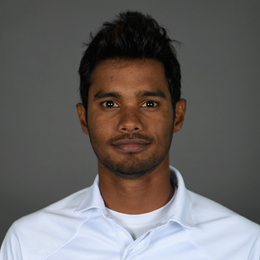 Having caught the selector's attention in 2015, De Silva failed to impress them on account of his inability to force the pace against Pakistan in T20Is. Later he proved his doubters wrong combining his gentle off-breaks with fierce hitting ability and brought himself back into reckoning next year for the England summer tour. Since then he hasn't looked back playing some vital innings for the Islanders while chipping in with crucial wickets too.

Sri Lanka maybe already out of the WC but the team's off-spinner believes they can end their campaign on a high with an upset win over India.

After Cummins dismissed Dimuth Karunaratne on the last ball of the second day, he took wickets in his first two overs Saturday.

Sri Lanka all-rounder Dhananjaya de Silva has pulled out from the tour of West Indies after his father Ranjan de Silva was murdered.