The agitation and protests against the Uttar Pradesh administration over handling of the Hathras gangrape and murder case continued on Sunday. Though Chief Minister Yogi Adityanath has already recommended a CBI probe into the case, on Sunday said that the opposition was indulging in a conspiracy to incite caste-driven communal riots in the state.

The agitation and protests against the Uttar Pradesh administration over handling of the Hathras gangrape and murder case continued on Sunday. Though Chief Minister Yogi Adityanath has already recommended a CBI probe into the case, the opposition including Congress is adamant on judicial inquiry. The day also saw Bhim Army chief Chandrashekhar Azad visiting the victim's family and demanding a Supreme Court judge monitored probe in the case. He also said that the family was not safe in the village. These developments took place a day after Congress leaders Rahul Gandhi and Priyanka Gandhi Vadra had met victim's family in Hathras to show solidarity. Also, the Special Investigation Team (SIT) on Sunday recorded statements of victim's family members. 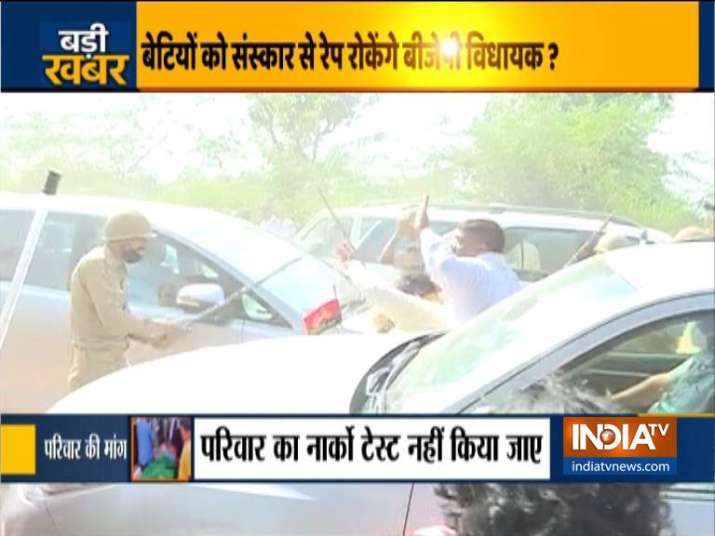 The case reminded of the horrors of the 2012 Nirbhaya gangrape and murder, triggering nationwide outrage and anger against the Uttar Pradesh Police. The girl, raped on September 14, died of her griveous injuries in the early hours of Tuesday at Delhi's Safdarjung hospital. Things only turned worse thereon. She was cremated in the dead of night near her home on Wednesday. Her family, who wished to see her and perform last rituals, alleged that the local police hurriedly conducted the rites on their own while they were locked up in the house.

Sources have revealed that the IPS Association in the state is upset over the action on police officials. Voicing their disappointment, the association said that decisions on any matter are not solely made by the police but the entire district administration. The association has raised serious questions over inaction over DM's role, sources told India TV.

In a tweet, BSP chief Mayawati said the victim's family has alleged allegations, including that of threatening, against district magistrate of the district. "Despite the allegations, UP government's mysterious silence is sad and worrying both. Although govt wants CBI probe, but how will a fair probe be carried out till the DM remains. People are in doubt."