Prabhas and Shraddha Kapoor shoot for song in Austria; Check out BTS photo from Saaho's set

Prabhas fans are eagerly waiting to see the Baahubali star back on the silver screen. The superstar has already made his 'darlings' excited with Saaho teaser and BTS photos which he and his co-stars keep on sharing on social media. Saaho, the action-packed drama will also have a romance blooming between Prabhas and lead actress Shraddha Kapoor. Hence, to shoot for the song, the cast and crew went to Austria along with choreographer Vaibhavi Merchant.

Prabhas, who made his Instagram debut lately shared a BTS photo in which we can spot him along with Vaibhavi Merchant and Shraddha. While the actress looks like a princess in ice-blue top, Prabhas looks dapper in a grey coat, matching ripped jeans along with white tee. ''Hi Darlings ! Shooting in Innsbruck and Tirol region of Austria, was one of the most incredibly awesome experiences I have ever had... @shraddhakapoor @vaibhavi.merchant,'' he captioned. We can see snow-capped mountains in the background. It seems Saaho cast is chilling amidst the picturesque location. Have a look at the post.

Shraddha Kapoor recently wrapped up Saaho and she took to her Instagram to share a photo with her team. “So we wrapped my bit on Saaho & its been 1 incredible journey. This is my core team on the film -Hair, make-up, wardrobe & spot. Missing from the photo are @leepakshiellawadi (costume) & Atul (security). Each member is too special & there is only too much love for them. Also, I’m very grateful that they are as lame as I am sometimes & also have the ability to crack really bad jokes and pass retarded statements. For that mostly, I am extremely lucky to know them. Thank you for the mutual stare-offs, looking at the wall punishments, getting immense joy when the other drops something, trips, mispronounces something etc. Abs dabs jabs for life,'' she wrote. 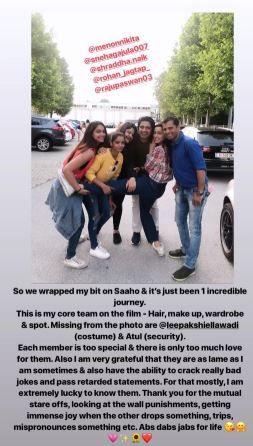 Shraddha will be seen in the role of a cop in the movie. This will be the first time when her fans will get to watch her in a fierce avatar. Talking about her role, the actress in an interview with DNA had said, "I am super-excited to play the role of a cop for the first time. It’s such a privilege. The police do so much for the country, it’s an honour for me to represent them."

She continued, "But, definitely, essaying a police officer is a special one because you are representing such an integral part of the security force of our country. It feels awesome to be playing one."