Bombay High Court granted bail to Aryan Khan, Arbaaz Merchantt and Munmum Dhamecha in the Mumbai cruise drugs seizure case. At present, Aryan is lodged at the Arthur Road Jail along with another accused Arbaaz Merchant.

After Bombay High Court on Thursday (October 28) granted bail to Bollywood superstar Shah Rukh Khan's son Aryan Khan in the Mumbai cruise drugs seizure case, his cousins Arjun and Alia Chhiba shared old pictures with the star kid on social media, commemorating the occasion. For the unversed, Arjun and Alia are the children of Aryan's mother Gauri Khan's brother Vikrant Chhiba. Alia took to her Instagram stories and shared a childhood picture featuring her with Aryan Khan, Suhana and Arjun.

On the other hand, Arjun also dropped an Instagram story in which he could be seen standing beside his cousin while posing for the camera. 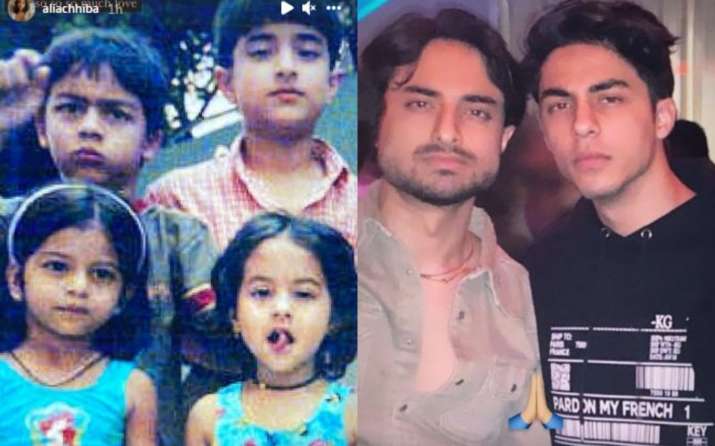 Meanwhile, Bombay High Court also granted bail to Arbaaz Merchantt and Munmum Dhamecha in the case. At present, Aryan is lodged at the Arthur Road Jail along with another accused Arbaaz Merchant. Whereas, Munmun Dhamecha is at Byculla women prison.

During arguments on October 26, former Attorney General Mukul Rohatgi, who presented Aryan khan argued that he is a 'young man' who should be sent to rehab rather than jail. The legal team of Aryan told the High Court that there was no evidence against him in the drugs-on-cruise case and was wrongly arrested.

Aryan Khan, Merchantt and Dhamecha were arrested by the NCB on October 3 and booked under relevant sections of the Narcotics Drugs and Psychotropic Substances Act (NDPS) for possession, consumption, sale/purchase of banned drugs, conspiracy and abetment. An NCB team busted an alleged drugs party on the Cordelia Cruise ship which was on its way to Goa at mid-sea on October 2. A total of 20 people, including two Nigerian nationals, have been arrested so far in the case.