Kareena Kapoor Khan, who is currently holidaying with actor-hubby Saif Ali Khan and kids-Taimur Ali Khan and Jeh, upped her selfie game on Thursday by sharing a drop-dead gorgeous picture from her ongoing dreamy trip. Take a look

Kareena Kapoor Khan is a stunner! The avid social media user knows how to make heads turn with her impeccable fashion statements. Her recent Instagram post is noteworthy too. The actress, who is currently holidaying with hubby Saif Ali Khan and kids-Taimur Ali Khan and Jeh, upped her selfie game on Thursday by sharing a drop-dead gorgeous picture from her ongoing dreamy trip. Yesterday, the family was papped making their way to the airport with nanny. The family trip comes shortly before Kareena is set to ring in her 41st birthday.

Taking to the Instagram, Kareena shared a picture of herself where she can be seen hiding her face with a huge straw hat. The actress wore a neon coloured tank top. For the caption, she put a GIF that read, 'who dat'. In the second picture, Bebo is seen relaxing by the beach. Sharing it, she wrote, 'Zoom in' followed by a heart emoji. 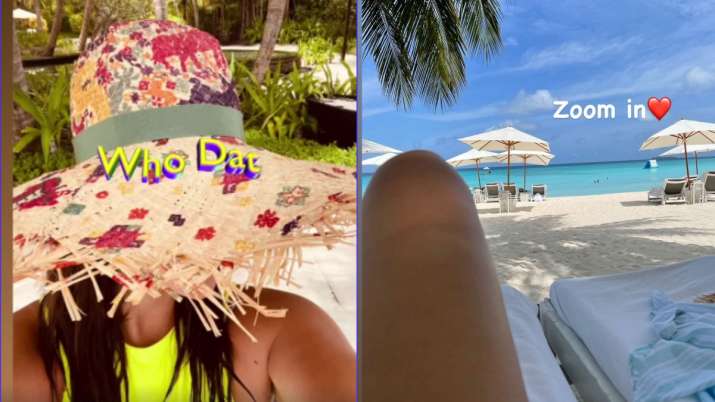 It is unclear where the couple has headed, however, as it can be speculated that the family has flown out to celebrate Kareena's birthday. Last month, Kareena and Saif along with their two kids went to the Maldives to celebrate the Saif’s 51st birthday.

The actress started her Maldives photo series with a birthday post for the actor-husband. "Happy Birthday to the love of my life... To eternity and beyond with you is all I want," she wrote in the caption.

Meanwhile, Kareena recently launched her book 'Pregnancy Bible', which captures her physical and emotional experiences from both her pregnancies. She is also set to make her debut as a producer with director Hansal Mehta's yet-to-be-titled thriller.

On the film front, Kareena will also be seen in 'Laal Singh Chaddha', which reunites her with Aamir Khan, who last worked with her in '3 Idiots'. Apart from Kareena, Mona Singh will also be seen in the movie. Adapted by Atul Kulkarni and directed by Advait Chandan, 'Laal Singh Chaddha' is an official Hindi remake of Robert Zemeckis' Oscar Award-winning 1994 film 'Forrest Gump', that featured Hollywood star Tom Hanks in the titular role.