Kriti Sanon says 'It’s not about YOU anymore, its about THEM,' earns love from Varun, Arjun and others

On Thursday, Kriti Sanon took to Instagram to share a post written by her that went viral in no time. She wrote, "They fight for you. Then they fight with each other. An unstoppable Chaos. And it's not about YOU anymore. Its about THEM. Maybe it always was.."

Bollywood actress Kriti Sanon keeps sharing cryptic posts on her social media. Most of them are about karma and patience as she, along with millions of others, await justice in Sushant Singh Rajput's death case. On Thursday, Kriti took to Instagram to share a post written by her that went viral in no time. She wrote, "They fight for you. Then they fight with each other. An unstoppable Chaos. And it's not about YOU anymore. Its about THEM. Maybe it always was.."

Commenting on the post, one Instagram user said, "So true! Justice for SSR is lost in between the media, the politicians and the so called feminists." Another wrote, "So trueeee....They r using ssr name for their own agenda" One fan said, "my respect for you is increasing Day by Day .. Really down to earth.. Actor like you are rare in Bollywood industry ..I wish you a Very good future and soo much love wishes." Kriti Sanon's post won love from Bollywood celebrities as well. Varun Dhawan, Arjun Kapoor, Radhika Madan and others commented hearted emojis on the post.

"I pray that the truth comes out SOON.. His family, his friends, fans and all loved ones deserve this closure," Kriti earlier wrote on her Instagram Story. "I hope and pray that the CBI takes over the case so it's investigated without any political agendas, in the TRUE sense, to provide justice to the family!! It's high time his soul rests in peace! #CBIForSSR #SushantSinghRajput," added the actress, who worked with Sushant in the 2017 release "Raabta", and is rumoured to have dated him once. 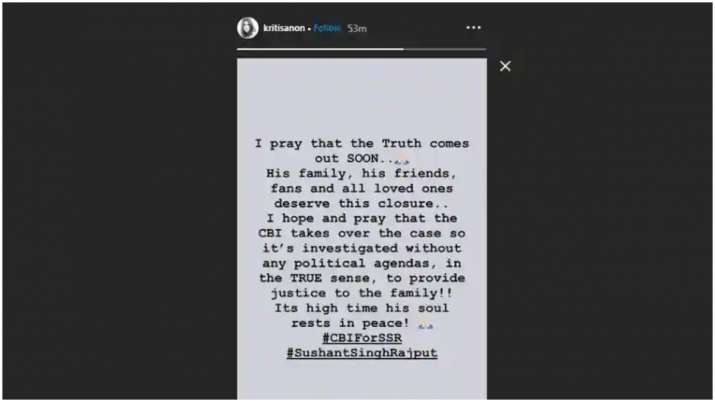 Sushant Singh Rajput's Sonchiriya co-star Manoj Bajpayee also believes that instead of mourning the loss of the actor, people have forgotten him in the fight. Manoj told an entertainment portal, "Whatever is happening, I doubt anyone is mourning him. Because every hour, the topic of debate is changing. And it’s very sad, whatever I have seen in the last couple of months. I think we have all left Sushant behind in all this."

On June 14, Sushant was found dead in his apartment in Mumbai. His family had lodged an FIR charging his actress girlfriend Rhea Chakraborty and her family with abetment to suicide among other charges. On August 8, the Supreme Court handed over the death case to CBI. Now, CBI, NCB and ED have been undertaking the investigation.