Tiger Shroff took to his Instagram to share a throwback video with Bollywood diva Disha Patani to wish her on her birthday today.

Tiger Shroff took to his Instagram to share a throwback video with Bollywood diva Disha Patani to wish her on her birthday today. As the Bharat actress turned 27 today, The SOTY 2 actor went down the memory lane and treated his fans with a video in which the two stars can be seen rehearsing for their first song together Befikre. The rumoured coupe is seen acing the steps with ease and their chemistry looks vibrant as always. Tiger captioned the video saying, "Happy birthday D" along with a number of emojis.

Tiger Shroff and Disha Patani keep ruling the headlines for their rumoured relationship. While the duo has never really opened up about their relationship status, their frequent lunch and dinner dates are proof that something is cooking. Just when the Baaghi actor wished his rumoured girlfriend on Instagram, fans flooded the post with adorable compliments for the two. However, it was Tiger Shroff’s mother Ayesha Shroff whose comment took away all the limelight. The movie producer and fitness expert commented on son Tiger’s birthday wish for Disha Patani with a number of hearts emojis. Check out- 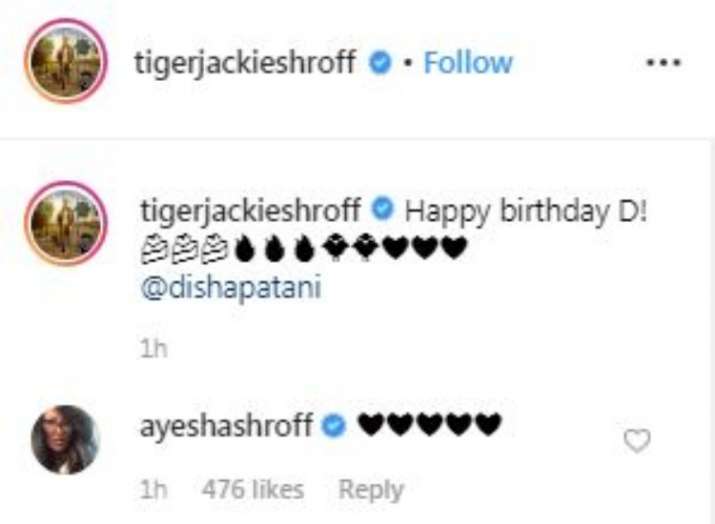 Recently, the actress opened up on her birthday plans and said that it will be low-key with just shooting for her next film Malang and an outing with some friends. We are sure Tiger would join her for dinner as well. A while back Disha was asked to accept her relationship with Tiger Shroff publicly by a fan to which she said, “I’ve been trying for so long, it’s been so many years and I’ve been trying to impress him. Now I’ve done this film Bharat where I’m doing all these stunts and I thought maybe he’ll get impressed but no luck. Yeah, we go to eat but that doesn’t mean he’s impressed, not like that like the crush impressed, but he likes everybody’s pictures like that. You must speak to him the next time. He’s shy and I’m shy so nobody’s breaking the ice.”

On the work front, Disha Patani was last seen in Salman Khan and Katrina Kaif starrer Bharat. Next she will be seen in Mohit Suri next Bollywood film Malang which also stars Kunal Kemmu, Anil Kapoor and Aditya Roy Kapur. The movie will hit the screens on Valentines Day next year.