Suhana Khan, daughter of superstar Shah Rukh Khan breaks the internet with her every picture. She is a social media sensation and there's no doubt in it. Suhana, who is currently abroad for her studies has plans to join Bollywood but not before she completes her basic education and film training. However, even before her Bollywood debut, she enjoys a massive fan following and the credit goes to her sizzling pictures which surface on the internet every now and then.

Suhana is a perfect diva because each and every time she manages to grab eyeballs. Her sassy looks never fail to amaze us and yet again, photos of Suhana have gone viral. In the latest pictures, Suhana sizzles in a deep-neck short dress which she had paired with a denim jacket. Red lips, open hair and that million dollar smile complete her look. In another picture, she shares some hearty moments with her friends. Check out both the photos below. 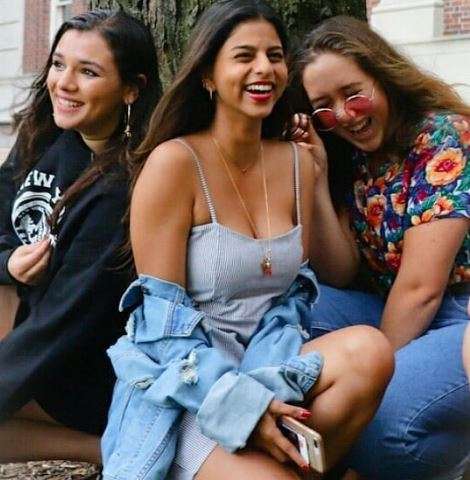 Talking about daughter Suhana Khan’s Bollywood aspirations, superstar Shah Rukh Khan has earlier revealed to Mumbai Mirror, “she (Suhana Khan) will go to an educational institute for three-four years to train in acting” after finishing school. He further added,“Gauri and I never told our kids that they have to grow up to be actors. People around would say handsome hai, tall hai, body achcha hai, but if looks were a criterion, I’d never have been an actor.”

Meanwhile, whenever Suhana gets off, she makes sure to visit her family in Mumbai. Besides spending some quality time with family, she also hangs out with her friends, especially Shanaya Kapoor and Ananya Panday. On a related note, Ananya Panday is all set to make her Bollywood debut with Student of the Year 2.

On the professional front, last year, Suhana made a stepping stone towards her dream as she featured on the cover of Vogue. Her stunning photo shoot pictures became talk of the town.