Shriya Saran got hitched to her Russian boyfriend Andrei Koscheev in an intimate ceremony on March 19, 2018 in Udaipur.

Shriya saran, who has proved her acting mettle with a number of movies like Rajinikanth starrer Shivaji: The Boss, Ajay Devgn’s Drishyam, Prabhas starrer Chatrapthi and many others, have broken the internet with her latest video. The actress is in Barcelona these days where she is enjoying every moment. The actress recently took to her Instagram to share a video in which she can be seen enjoying the rain in her balcony.

Shriya Saran shared the video on Instagram and wrote, “Just another rainy day in Barcelona.” In the video, the actress can be seen donning a purple top with shorts and enjoying the pleasant weather. She can be seen making the most of the rain and dancing in her balcony as the song plays in the background. Watch the viral video here-

Soon after the actress shared her video on social media, it went viral. Fans flooded the post with comments and complimented the actress for sassy moves. The post has already attracted more than 8.5 lakh views on Instagram. Earlier, the actress also grabbed eyeballs for her sultry dance moves in a monokini. One of the Instagram fan pages of Shriya shared a video of the actress in which she can be seen standing in front of a portrait of a man, which gradually changes into a monkey. Watch the video here-

On the professional front, Shriya Saran made her debut in 2001 with the Telugu film Ishtam. Her first Bollywood film was Tujhe Meri Kasam which came in 2003. Talking about her personal life, Shriya Saran got hitched to her Russian boyfriend Andrei Koscheev in an intimate ceremony on March 19, 2018 in Udaipur. 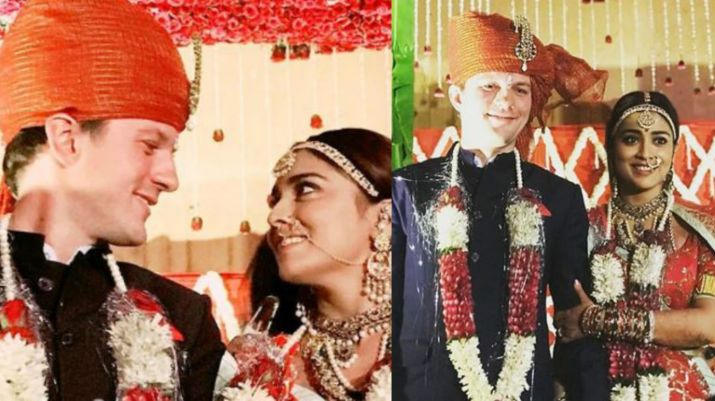