Jharkhand Election Results 2019: The JMM-Congress-RJD alliance in Jharkhand is leading in 47 out of the 81 seats of state Assembly while the ruling BJP is lagging behind with 23 seats, according to the latest figures.

We must note that these are LIVE counting updates and there is a wide variation in projections. In more than 30 out of 81 seats, the margin between two candidates is anything from 300-800 votes. Follow Indiatvnews.com's LIVE updates for the latest election results.

10:22 pm: The BJP has blamed local issues and internal strife for its electoral drubbing in Jharkhand. Party spokesperson GVL Narasimha Rao said that the party failed to build an alliance against a united opposition. "A detailed analysis will be done," he said.

7:55 pm: Raghubar Das tenders his resignation to the governor at Raj Bhawan

"Congratulations to @HemantSorenJMM  Ji and the JMM-led alliance for the victory in the Jharkhand polls. Best wishes to them in serving the state" said PM Modi in his tweet

6:20 pm: We accept mandate given by people of Jharkhand, says Amit shah

Jharkhand CM Raghubar Das has conceded defeat of his government in Jharkhand Assembly Elections 2019. He said that the party will analyze reason behind the defeat.

- The trends in Jharkhand elections have shown the people's will. I'm grateful to the people of Jharkhand
- Today is the day when I take a resolution to stand by the people of the state
- The time has come to fulfill the needs and demands of Jharkhand

03:03 pm: I will remain as an independent candidate and support or oppose the policies of government on its merit, says Saryu Roy, on being asked if he'll go with grand alliance or BJP 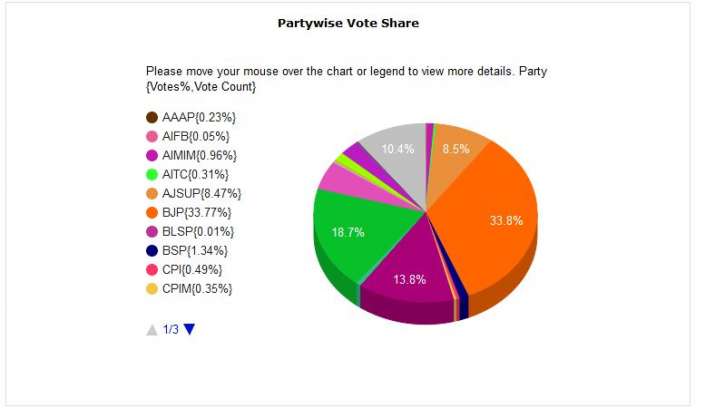 01:41 pm: Lead of about 1500-2000 will continue in the coming rounds of counting. I could win by a margin of 30,000 votes, says Saryu Roy, independent candidate from Jamshedpur East, leading against Chief Minister Raghubar Das 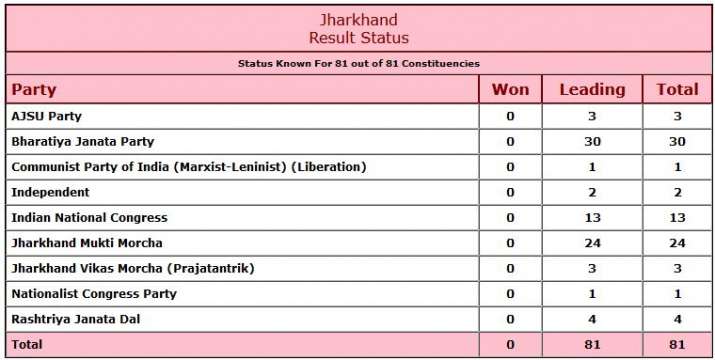 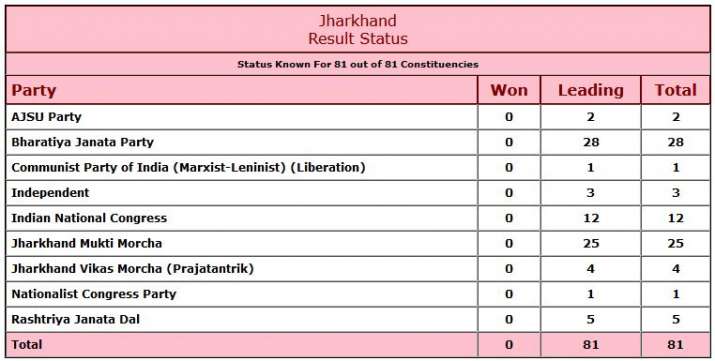 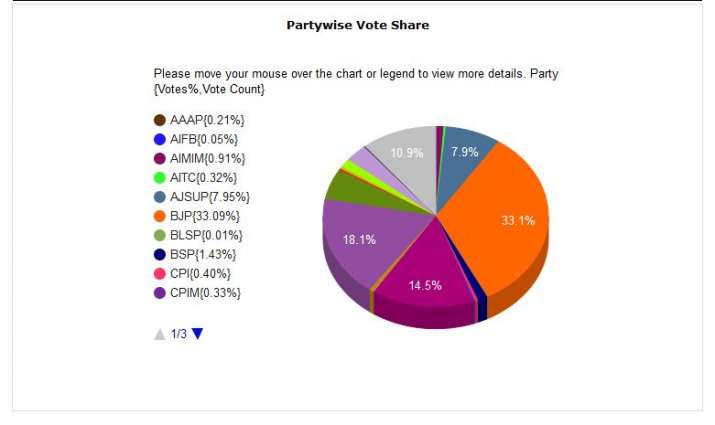 11:57 am: We were confident that Jharkhand will give a clear majority to our alliance. Trends are good but I won't make comment until the final result. We've clearly said that Hemant Soren will be CM candidate of our alliance, says Congress' Jharkhand in-charge, RPN Singh

11:47 am: Jharkhand Chief Minister Raghubar Das addresses press conference
- Not feasible to react to initial trends of Jharkhand elections
- The result will be out today and the picture will be clear
- Hardly 7 rounds of vote counting are complete as of yet and so I do not find it right to comment
- Confident of BJP's victory in Jharkhand
- I will hold a press conference later in Ranchi later when the results are out
- Had Saryu Rai caused damage, I would not have received the votes, which I did so far
- Let me clearly state that we're not only winning but we'll also form govt under the leadership of BJP in Jharkhand

11:02 am: Official trends by Election Commission 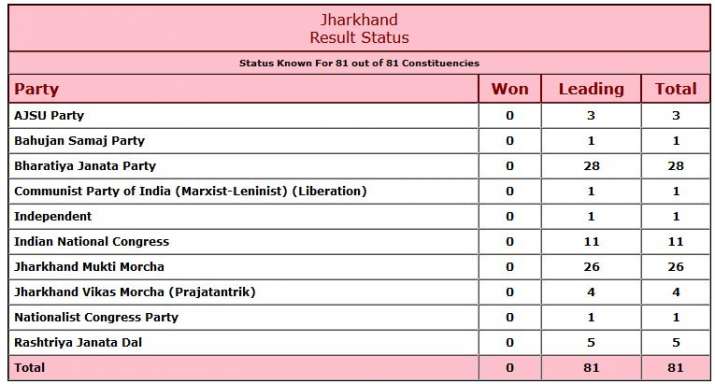 10:55 am: The results are not as per our expectation. We will have to accept people's mandate. We will play the role which people's mandate has given us. Let the results come, then we will sit and discuss what to do, says JVM(P)'s candidate from Dhanwar, Babulal Marandi

10:35 am: JMM's Rabindranath Mahato leads by 123 votes against BJP's Satyanand Jha in Nala

10:18 am: There is going to be a clean sweep for Mahagathbandhan (grand alliance) in this election. We have fought elections under the leadership of Hemant Soren. He is going to be the Chief Minister, says RJD's Tejashwi Yadav

09:48 am: Menka Sardar of BJP leads over Sanjib Sardar of JMM by 5,144 votes in Potka seat of Jharkhand

09:44 am: Party wise vote share according to Election Commission 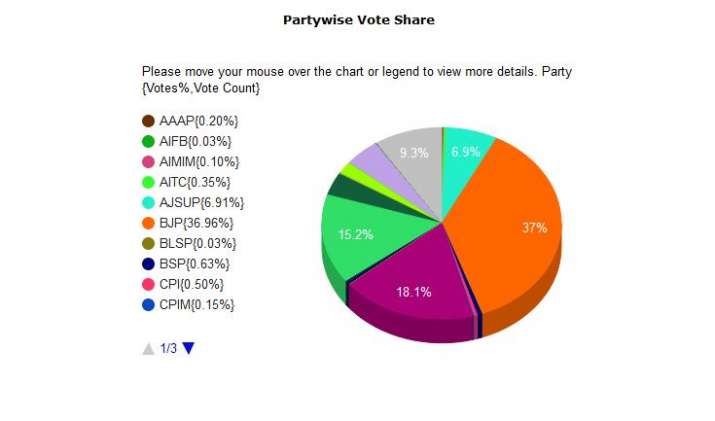 09:39 am: Sanjay Prasad Yadav of RJD leads over Amit Kumar Mandal of BJP by 3,315 votes in Godda seat

09:38 am: Official Election Commission trends
BJP leading on 8 seats
Congress on 6
RJD on 3
JMM on 4
AJSU on 1

09:32 am: Official trends from Election Commission

09:21 am: Former Chief Minister of Jharkhand Babulal Marandi likely to emerge as the kingmaker

09:00 am: Counting of votes through Electronic Voting Machine (EVM) begins 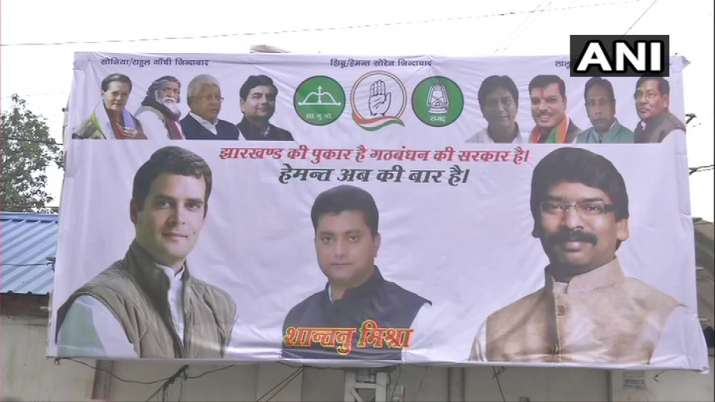 07:55 am: Image below shows a counting center in Ranchi. Counting of votes to begin at 8 am​ 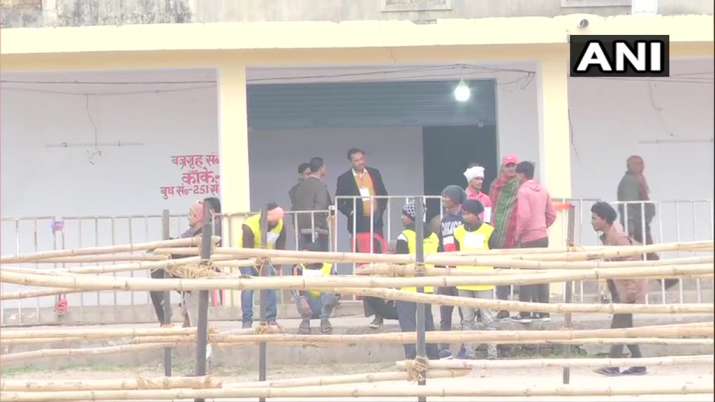 07:36 am: Image below shows a counting centre in Dumka​. Counting of votes to begin at 8 am 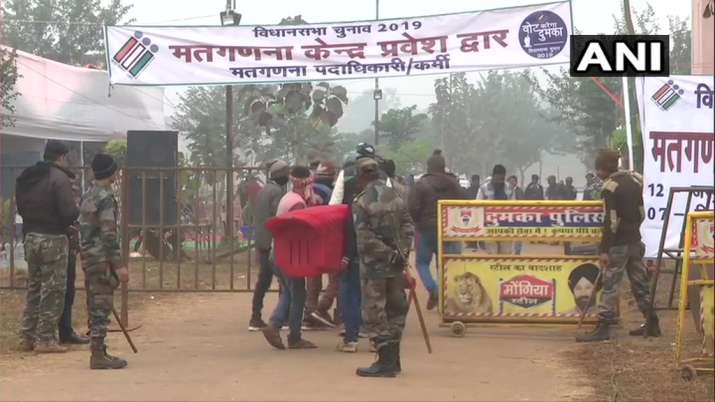 07:08 am: Most exit polls for the Jharkhand assembly elections have predicted a hung assembly in the state with an advantage to the Congress-JMM+ alliance.​

06:53 am: The overall voter turnout in Jharkhand was recorded at 65.17 per cent. Voting passed off peacefully across 81 assembly constituencies in the state.​

The hot seat, which will be the center of attraction on the counting day will be Jamshedpur East. Chief Minister Raghubar Das has been winning this seat since 1995. He is pitted against ex-cabinet colleague Saryu Rai. Saryu Rai turned rebellion after his ticket was put on hold by the party. The other important seats are Dumka and Barhet from where JMM Executive President and former Chief Minister is contesting. He is pitted against Social Welfare Minister Louis Marandi at Dumka.