Newcastle, the injury-hit and relegation-threatened team, pulled off one of the surprise results of the season by coming from behind to beat Manchester City 2-1.

Rafa Benitez never won the Premier League in his six years with Liverpool but he has done his old team a huge favor in its bid to end a 29-year wait for English soccer's biggest prize.

Newcastle, the injury-hit and relegation-threatened team now managed by Benitez, pulled off one of the surprise results of the season by coming from behind to beat Manchester City 2-1 on Tuesday.

Premier League: Maurizio Sarri must face up to own failings in Chelsea blame game

City squandered a lead for the third time this season — this one at St. James' Park arrived after just 24 seconds through Sergio Aguero — and the champions have lost their sheen of impregnability as they bid to retain the league title for the first time.

They stayed four points behind Liverpool, which can extend its lead to seven by beating Leicester at Anfield on Wednesday. There are just 14 matches for both teams after that.

"When you are behind you have to win games, and we couldn't do that," said Guardiola, who remarked before the game that one slip-up would leave City's title hopes "almost over."

It was a disappointing night for Manchester all around.

Manchester United's interim manager, Ole Gunnar Solskjaer, was looking to become the first coach to win his first seven matches in charge of a Premier League team and continue his perfect start to managerial life at his former club.

That's one record he won't be holding after Burnley — a team fighting relegation like Newcastle — surprisingly drew 2-2 at Old Trafford, with United scoring goals in the 87th minute through Paul Pogba's penalty and the second minute of injury time through Victor Lindelof to salvage a draw. 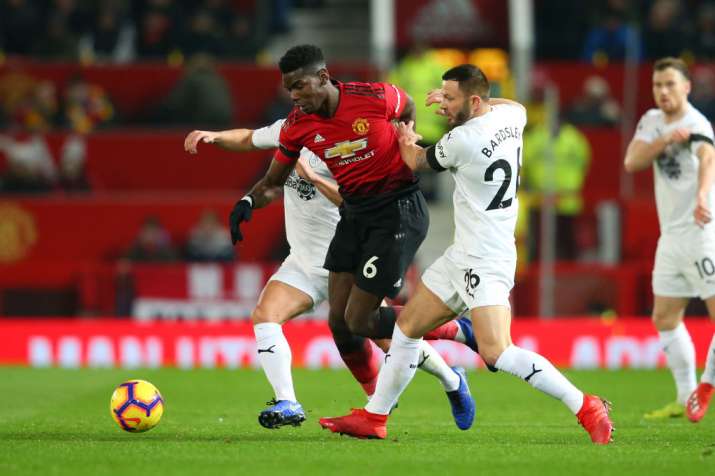 Still, the way United kept fighting and scored late goals will be viewed as a positive by United's hierarchy as it weighs up whether to give Solskjaer the job on a full-time basis.

"The comeback was brilliant," said Solskjaer, who was seeking a record-extending ninth straight win in all competitions to open his interim tenure. "The players have been asked about how they would react if they went 1-0 or 2-0 down, so I felt the comeback was fantastic."

United fell two points behind fifth-place Arsenal, which beat Cardiff 2-1, and fourth-place Chelsea, which plays away to Bournemouth on Wednesday, in the race for the four Champions League qualification spots.