A chip over Albacete: 15 years ago, Lionel Messi began his great goalscoring adventure with Barcelona

Exactly 15 years ago, Lionel Messi in his no. 30 jersey scored his maiden goal for Barcelona to mark his arrival at the big stage.

Exactly 15 years ago, a 17-year-old boy from Argentina changed the game of football in many ways. It was the La Liga clash between Barcelona and Albacete at Camp Nou; the hosts were winning the match 1-0 in 87th minute, when, then manager Frank Rijkaard decided to bring a substitute. Star striker Samuel Eto'o was subbed-off for a 17-year-old kid. His arrival created some energy on the pitch, within the four minutes he scored an absolute beauty and the whole Camp Nou started chanting ‘MESSI... MESSI...’

Lionel Messi in his no. 30 jersey marked his arrival at the big stage. And it was none other than the great Ronaldinho, who provided the assist to Messi's first goal. The Brazillian in his style got past the defenders with his brilliant skills and gave a lobbed pass to Messi and the young kid effortlessly chipped it over goalkeeper Valbuena to score his first goal at senior level.

1️⃣5️⃣ years since Leo #Messi ALMOST scored his FIRST EVER GOAL for Barça!

Ronaldinho lifted young Messi on his shoulders and the magic arrived at Barcelona in the form of the young Argentinian. From that day, Messi just doesn't stop scoring as he has netted 627 goals for Blauguarans in 718 appearances. He is the highest goal scorer in La Liga history. 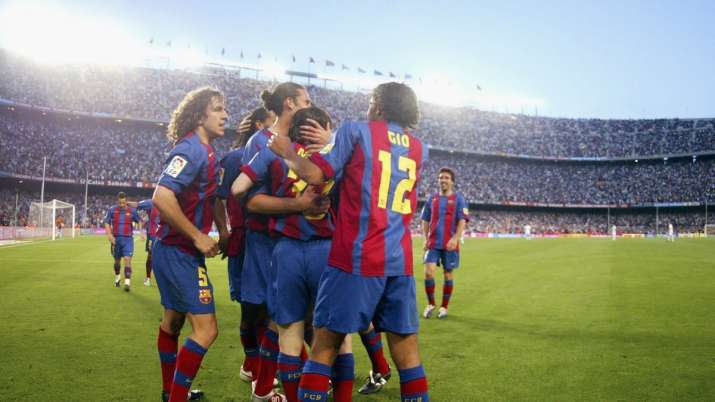 "It was really beautiful," coach Frank Rijkaard said afterwards. "He showed that he has talent. He had one before that which was even more difficult, but it was ruled out. He kept very cool and he scored a good goal.

"He's a lad with a lot of talent, a lot of quality. He is young, but he's training with us and he feels ready to be more involved on the pitch with the first team.:

Messi is known for his loyalty towards the Catalan giants as he always said he wants to retire at Barcelona. Messi created his own legacy in the world of football with most Ballon d'Or trophies -six, he is also the proud winner of European Golden shoe for six times, which is also the highest by any player.

Messi only failed once to hit 50-plus goal mark in the past decade and that was in 2013, when he ended with 45 goals.

In the initial stages of his career, some were of the opinion that Messi is nothing without Xavi and Iniesta. When Neymar arrived at Catalan giants, it was also said that Neymar was the reason behind Messi scoring massive amount of goals. They all left Barcelona but it didn't stop Messi at any stage as he remained strong and continued to rule the football world.