29 crew members of an offshore Support Vessel jumped into the water after their ship caught massive fire in Visakhapatnam on Monday.

A massive fire engulfed an offshore support vessel named Jaguar near Visakhapatnam port on Monday, following which 29 crew members had to jump into a river to save their lives.

The incident took place at 11:30 am today when the blaze broke out in Offshore Support Vessel Coastal Jaguar. Reportedly, there was a loud explosion onboard Coastal Jaguar, following which thick smoke emanated from the vessel.

#WATCH Visakhapatnam: At 11:30 am today, 29 crew members of Offshore Support Vessel Coastal Jaguar jumped into water after a fire engulfed the vessel. 28 rescued by Indian Coast Guard. Search for 1 missing crew underway. Exact cause of fire yet to be ascertained. #AndhraPradesh pic.twitter.com/pksYGrC9ZE

According to a spokesperson of Eastern Naval Command, crew of offshore support vessel Coastal Jaguar had to abandon their vessel and jump into water to save themselves from the fire which engulfed the vessel.

"There was reportedly a loud explosion onboard Coastal Jaguar that was followed by thick smoke emanating from the vessel," he said.

ICGS Rani Rashmoni which was in area was diverted to coordinate the rescue operation. Rani Rashmoni in coordination with Visakhapatnam Port Trust (VPT) boats rescued the distressed crew.

"28 out of the 29 crew present on board have been rescued, search for one missing crew is in progress," the spokesperson said.

Dramatic scenes of the crew jumping into the sea to save themselves and the rescue operations by the ships were witnessed. 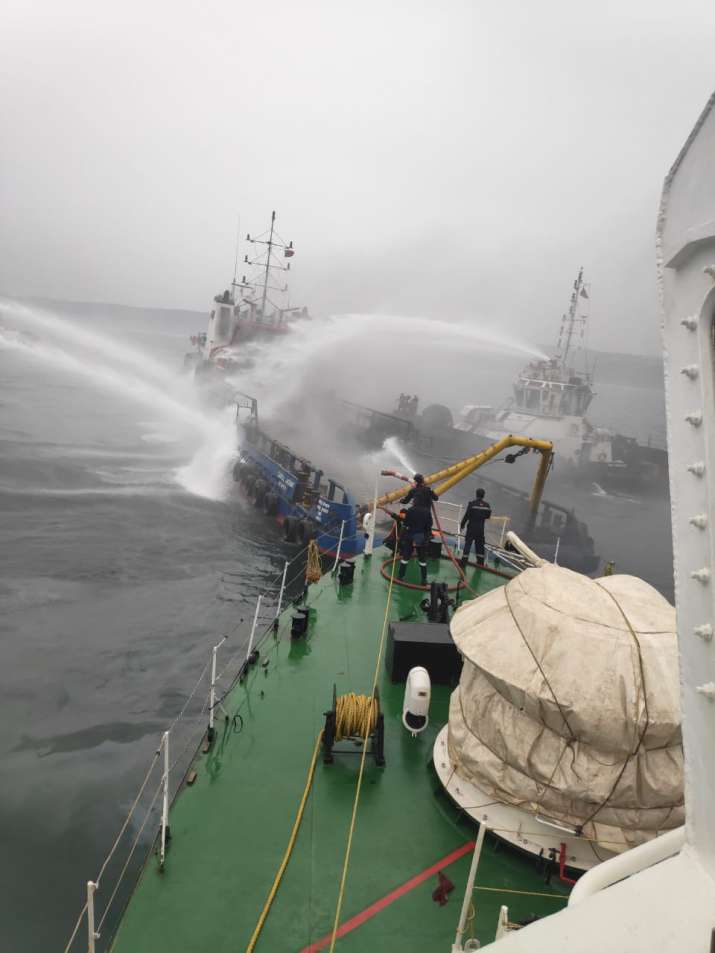 The exact cause of the fire is yet to be ascertained.

ICGS Rani Rashmoni, which was in the area, was diverted to coordinate the rescue operation.