Social media on Monday got filled with remembrance posts and wishes for Sushant Singh Rajput. His 'Pavitra Rishta' co-star and actress Ankita Lokhande took to Instagram and shared videos featuring their happy moments together that included glimpses from various vacations as well as events that the two of them attended together.

Today marks Sushant Singh Rajput's first death anniversary. The 34-year-old actor was found dead in his Mumbai residence on June 14 last year. Social media on Monday got filled with remembrance posts and wishes made by his fans for the late actor. Not just them but even many celebrities shared fond memories with the 'Chichhore' actor. Sailing in the same boat is Sushant's 'Pavitra Rishta' co-star and actress Ankita Lokhande who took to Instagram and shared videos featuring their happy moments together. The actor's then-former girlfriend treated fans with glimpses from various vacations as well as events that the two of them attended together.

One of the clips was captioned, "Left with these memories only. You will always be loved and cherished." While alongside the other one, she wrote, "14 June. This was our journey! Phir milenge chalte chalte."

Have a look at the two posts made by her here:

Just yesterday, she returned to social media and shared a picture from the hawan that was conducted in Sushant's remembrance. 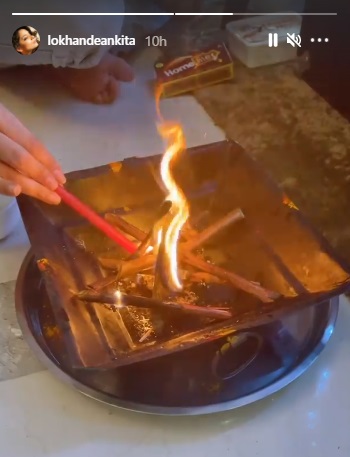 For those unversed, Ankita and Sushant had dated each other for nearly six years before parting ways in 2016. They both met on the sets of 'Pavitra Rishta', which recently completed 12 years. Ankita even posted about it a few days ago. "12 Years!! Ohh, Yes Yes It's 12 Years Of Pavitra Rishta, Time Flies Really Quickly. With more than 66 Awards #Pavitrarishta remains to be one of the most loved show on Indian Television. Here's to 12 glorious years of this iconic show. Which not only gave me Archana but love all across the globe and made me who I'm today," Ankita wrote.

"The story that celebrates joy of life, love, family and friendship. Thank you @balajitelefilmslimited @ektarkapoor for making me Archana and thank you to all the cast and crew. Thank you Maa and Paa for always supporting me. #pavitrarishta #12years #balajitelefilms #archana #ektakapoor #love #memories," she added.

Early investigations by Mumbai Police concluded that Sushant died by suicide. The case is still under investigation by the Enforcement Directorate, Narcotics Control Bureau and Central Bureau of Investigation.

Also Read: Rhea Chakraborty shares awwdorable pic with 'Bebu' Sushant Singh Rajput: 'There is no life without you'