The Kapil Sharma Show will be seen hosting the 1983 Cricket World Cup winning team in the upcoming episode which was led by Kapil Dev.

Television’s most popular comedy show, The Kapil Sharma Show, is surrounded by a pool of controversies. While much is said related to Archana Puran Singh replacing Navjot Singh Sidhu and trends like #BoycottKapilSharmaShow ruling on Twitter, it is difficult for fans to decide since the show is all set to grace 19983 cricket world cup winning team. There is no denying that cricket is the most loved game in India and the world cup means everything to the fans. Going by the latest pictures, The Kapil Sharma Show will be seen hosting the 1983 Cricket World Cup winning team in the upcoming episode which was led by Kapil Dev.

The pictures surfacing the internet have the whole team posing for the camera while on the Kapil Sharma Show. In another picture, cricket maestro Kapil Dev is seen interacting with the host Kapil Sharma. Another picture has team members interacting on the show. The pictures have definitely piqued the excitement of the fans. It is being said that the episode is going to be World Cup 1983 special in which all members of ICC Cricket World Cup 1983 like Kapil Dev, Mohinder Amarnath, Sandeep Patil, Dilip Vengsarkar, Krishnamachari Srikkanth, Roger Binny, Kirti Azad, Madan Lal, Syed Kirmani, Balwinder Sandhu, Yashpal Sharma and Sunil Valson will appear as guests. Check out the pictures here- 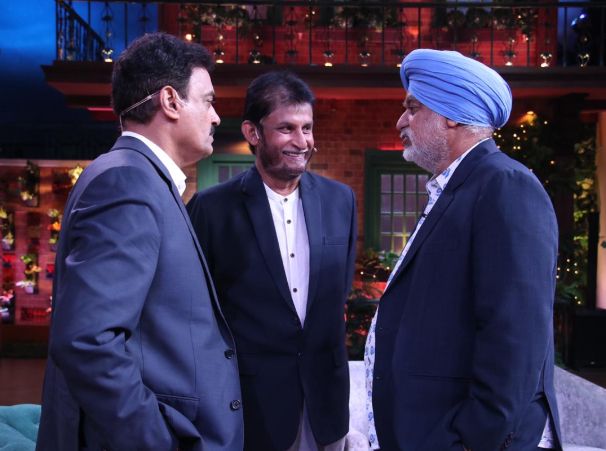 The latest buzz around the Kapil Sharma Show reveals that Archana Puran Singh has permanently replaced Navjot Singh Sidhu post his remarks on Pulwama Terror Attack. When asked, the actress didn't confirm the reports but said there's 'a possibility' that she might step into the shoes of the cricketer-turned-politician on the show. "On the set tonight (Wednesday) with Kapil. Great shoot with the king of comedy Kapil Sharma. Took a selfie break to celebrate old associations and new beginnings," Archana tweeted after the shoot.

On the set tonight with Kapil... great shoot with the king of comedy @KapilSharmaK9
Took a selfie break to celebrate old associations and new beginnings ! @SonyTV #KapilSharmaShow #shooting #actorslife pic.twitter.com/tWPBuOSPzn

For the uninitiated, post Navjot Singh Sidhu’s comments on Pulwama terror attack, the makers asked him to maintain distance from the show as it was tampering its reputation. Archana Puran Singh was asked to replace the politician from his seat on the show and has also shot for a couple of episodes. After the Pulwama attack on Thursday, February 14, Navjot Singh Sidhu had said in an interview that the entire nation should not be blamed for the acts of a handful people. He said, “There are good, the bad and the ugly. Every institution has them. Every nation has them. The ugly need to be punished. But individuals cannot be blamed for the dastardly act.”