Sushant Singh Rajput’s friend Samuel Haokip took to Instagram to address the threats and shared that he will take a legal step against those who have been threatening him and also shared screenshots of his messages in which he has warned them as well.

Sushant Singh Rajput’s friend Samuel Haokip, who had stayed with the actor at his house for a long time, has filed a complaint with the cyber cell after receiving threats of a 'suicidal end' by the late actor's fans. Samuel took to Instagram to address the issue and shared that he will take a legal step against those who have been threatening him and also shared screenshots of his messages in which he has warned them as well. He also confirmed that his complaint has been registered.

Taking to his Instagram stories, Samuel Haokip wrote, "I swear that you won’t have time even to regret!"  The follow-up message read, "Be ready for your bl**dy suicidal end , despicable @jamlenpao !!! You may be saved by the mafia, but you’re vulnerable to the world power of revenge!! Don’t forget that there are powerful dark web hackers cooperating with us!" Reacting to the threat, Samuel said, "I am filing an FIR under IPC and under IT Act,2003 with the Cyber Cell against you and your IP Address." to this, the user said, "You can do actions against me& all the other SSR warriors as much as you want,despicable traitor. That will put you in more extra danger already!" 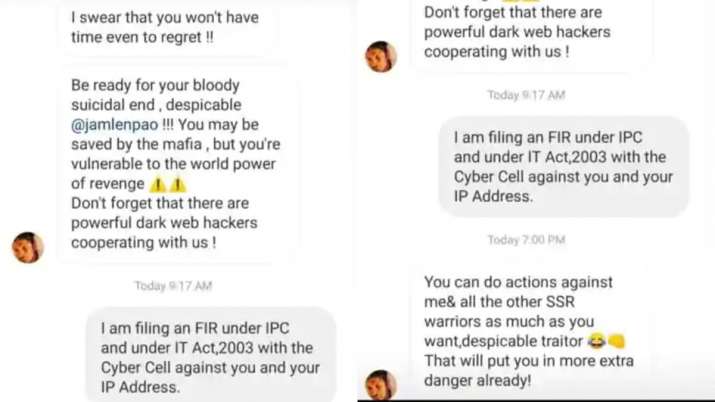 On a related note, Sushant's friend Samuel Haopkin has earlier revealed that the late actor was in a relationship with his Kedarnath co-star Sara Ali Khan. He had shared a post on Instagram and had written, "I remember the time during Kedarnath promotions... Sushant and Sara were totally in love...they were inseparable... So pure and childlike innocence. They both had tremendous respect for each other which was so rare to see nowadays in relationships."

Talking about how much respect Sara had for Sushant's friends, family and even his staff, Samuel added: "Sara along with Sushant had genuine respect for everyone in Sushant's life...be it family, friends and even staff. I wonder whether Sara's decision to break up with Sushant right after Sonchiriya's box office performance was due to any pressure by the Bollywood Mafia."

Sushant was found dead in his Bandra apartment on June 14 in Mumbai. While Mumbai Police initially concluded the actor had committed suicide, the case was subsequently taken up by CBI, Enforcement Directorate and Narcotics Control Bureau.