"We look back in anger at the people who've hurt us, the frustrations we've felt, the bad luck we've endured. We look forward in fear at the possibility that we might lose our job, contract a disease, or suffer the death of a loved one," it read further.

"The place we need to be is right here, right now- not looking anxiously at what has been or what might be, but fully aware of what is." 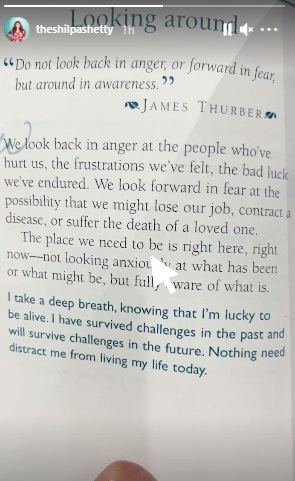 Earlier in the day, Shilpa Shetty's last social media post before her husband's arrest also caught everyone's attention. The post was about Tratak meditation and a calm mind. She captioned the post as, ''We may not always have the power to change what’s happening around us, but we can definitely control what happens within. That is possible only through Yoga. Give yourself the ability to calm the mind, reduce unwanted thoughts, centre your wandering attention, and improve your focus through Tratak Meditation''.

"Though the company was registered in London, the content creation, operation of the app and accounting was done through Kundra's Viaan Industries," said Milind Bharambe, Joint Commissioner of Police (Crime), at a press briefing. Kenrin is owned by the brother-in-law of Kundra, he said.

The police have gathered evidence that establishes connections between the two business entities, the officer said. They have found their WhatsApp groups, e-mail exchanges, accounting details and some pron films after a search of Kundra's Mumbai office, Bharambe said.