Global star Priyanka Chopra isn't just a fabulous actress but also a fashion inspiration to many. The actor who is currently in London and shooting for her upcoming spy series, Citadel shared some glamorous pictures.

Global star Priyanka Chopra isn't just a fabulous actress but also a fashion inspiration to many. She never fails to impress her fans and followers with her vogue style statements. The actor who is currently in London and shooting for her upcoming spy series, Citadel shared some glamorous pictures. Sharing the pictures Priyanka wrote in the caption, "This bag tho…@fendi #FendiFirst. Congrats @mrkimjones @Silviaventurinifendi on your upcoming #FendiFW21 collection. It’s stunning."

In the pictures, Priyanka Chopra is seen wearing a high neck beige top, paired with a metallic, champagne-coloured skirt. She completed the look with golden high heels. Her tan leather bag and dark sunglasses with chunky gold earrings also won praises from the fashion police. In a second picture, she can be seen wearing a brown overcoat on her outfit.

Earlier, the actress surprised everyone with her bloody-faced selfie from the sets of the film. She had to apply fake blood on her face for one of the scenes.

Sharing the image on her Instagram Story, she wrote, "Ha! You should see the other guy!" Along with it, Priyanka added hashtags such as 'set life', 'actor's life', 'wake up and make up' and 'Citadel'. The Amazon-backed project is being helmed by the Russo Brothers. 'Game of Thrones' star Richard Madden is also a part of it. 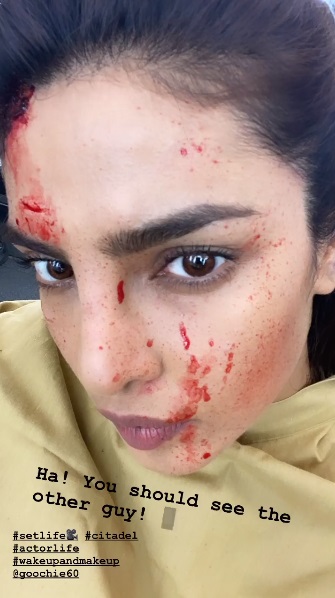 Priyanka Chopra recently attended the Wimbledon Women's Singles finals between Ashleigh Barty and Karolina Pliskova. The actress shared many pictures from the event.

On the work front, Priyanka was last seen on screen in the OTT film "The White Tiger". The Ramin Bahrani directorial stars Adarsh Gourav and also features Rajkummar Rao in a pivotal role.

Apart from this, Priyanka will also be seen in 'Matrix 4'. A few months ago, she even had launched her memoir -- 'Unfinished'.