To wish Arjun Kapoor on his birthday, Malaika Arora took to Instagram to post an adorable picture of the couple along with a sweet note. Take a look.

Arjun Kapoor who ringed in his 36th birthday on Saturday received a special post from beau Malaika Arora. Calling the Bollywood actor her 'sunshine', Malaika posted an adorable photo of the couple. In the mushy pic, Arjun and Malaika can be seen sharing a warm hug as they smile ear to ear. They are dressed in comfortable outfits, with Malaika opting for comfortable athleisure while Arjun is seen in a black T-shirt and matching shorts.

She also posted a picture with him on her Instagram stories. 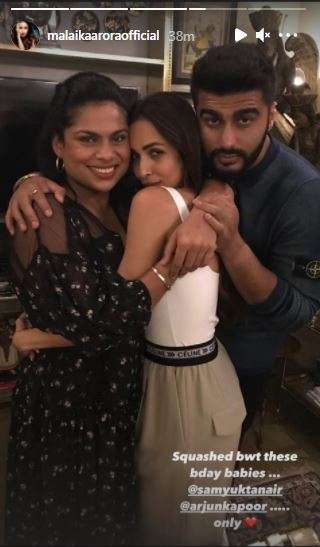 The couple made their relationship official with a post on the actor's birthday in 2019. While Arjun and Malaika have not denied their relationship since then, they don't post many photos together on the internet. It is only on rare occasions that we see the duo together. Last year in December, Malaika and Arjun enjoyed some quality time with each other in Dharamshala with Kareena Kapoor Khan and Saif Ali Khan. They went exploring the hills, and cafes. Saif and Arjun were shooting for the upcoming horror comedy "Bhoot Police" across locations in Himachal Pradesh. Later, they also celebrated new year's together.

Celebrations for Arjun's birthday started on Friday night at Mumbai's Taj Mahal Palace hotel. The actor had a star-studded birthday bash attended by some of his industry friends and family members. His bash was attended by many Bollywood celebrities including Ranveer Singh, Ranbir Kapoor, Alia Bhatt, Vijay Deverakonda and others. Arjun's sisters Anshula, Janhvi and Khushi Kapoor also arrived for the birthday party.

On the work front, Arjun Kapoor has the films "Ek Villain Returns" and "Bhoot Police" in the pipeline while Malaika currently judges the dance reality show "Super Dancer 4".