Bollywood actress Anushka Sharma has been keeping active on social media and creating awareness among fans to take the lockdown seriously and stay indoors to contain the spread of coronavirus.

Bollywood actress Anushka Sharma is making the most of her quarantine period. Other than enjoying quality time with her husband Virat Kohli, the actress is interacting with her fans through social media as well. She keeps sharing posts to share her special moments with her fan base. On Friday, the actress decided to give them a bright smile as she shared a meme of herself on Instagram. Anushka shared a photo of her most popular character of Mamta from the film Sui Dhaga and left her fans in splits.

Anushka Sharma's memes went viral on the internet in 2018 during the release of the film. Sharing the photo, the actress wrote, “Bore hore hoge, thoda hans lo." In the photo, she shared a now and then photo of how she is currently and how she will be after the 21-days of lockdown period. While the current photo shows her all glammed up, the after lockdown photo shows her character Mamta, wearing a plain saree and having a bored expression on her face. Check out-

Later the actress also reshared her make-up artist's Instagram story which had another meme featuring her as the coronavirus. Check it out- 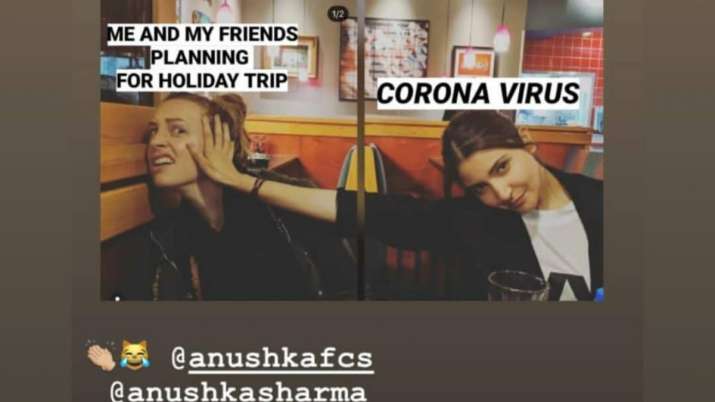 Anushka Sharma has been creating awareness among fans to take the lockdown seriously and stay indoors to contain the spread of coronavirus. The actress has shared multiple videos with husband Virat Kohli urging fans to take care of their hygiene and take precautionary measures to protect themselves. They have also asked their fans to be as productive and creative with themselves as possible during their quarantine period.

On the professional front, Anushka Sharma was last seen in Annand L. Rai directorial Zero alongside Shah Rukh Khan and Katrina Kaif. She hasn't announced her next project yet.