Anushka Sharma's powerful post on having male child: Don't think of it as a PRIVILEGE

Bollywood actress Anushka Sharma shared a powerful post on Friday reacting to the recent happenings in the country. The actress penned down how gender equality plays a role in these situations and about the privilege of having a male child.

Bollywood actress Anushka Sharma shared a powerful post on Friday reacting to the recent happenings in the country. The actress penned down how gender equality plays a role in these situations and about the privilege of having a male child. The actress wrote, "In our society having a male child is seen as a 'privilege.' Of course, it's no more privilege than having a girl child but the fact is that this so-called privilege has been viewed incorrectly and with an extremely myopic view. The only 'privilege' is that one has the opportunity to raise a boy in a way that he respects a girl. That's your DUTY as a parent to society. So, don't think of it as a PRIVILEGE."

Anushka Sharma added, "The gender of the child doesn't make you privileged but it is actually the responsibility you owe to society to raise a boy so well that women feel safe and protected." 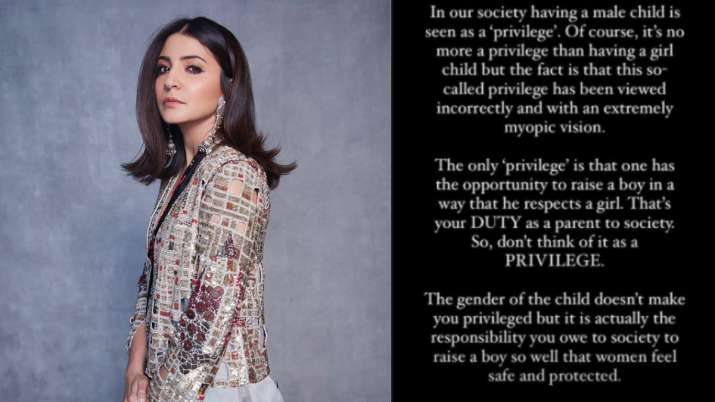 After the Hathras rape caser, the country witnessed another blow when a 22 years old girl was allegedly raped. Many Bollywood celebrities reacted to the horrific incident and slammed those who consider women as women. Anushka has also expressed her anger about the same and had written, "Barely any time has passed and we are hearing of another brutal rape!?! In which world do such monsters think they can do this to a young life. This is beyond comprehension, so distressing! Is there any fear in the minds of such men? How do we as a society put fear in them and protect our women?"

On a related note, Anushka Sharma is currently spending time with her husband, cricketer Virat Kohli, in the UAE, where the latest edition of Indian Premier League is being held. Last month, Anushka and Virat had announced that they are set to be parents for the first time. They will welcome their first born in January 2021.

Recently, Anushka Sharma treated fans with a new picture. In the Instagram image, Anushka, who is pregnant, flaunted her baby bump in black swimwear standing in a pool. "Acknowledging the good that you already have in your life is the foundation for all abundance' - Eckhart Tolle. Gratitude to all those who showed me kindness and made me believe in goodness in this world, opening my heart enough to practice the same with the hope to pay it forward. Because... After all, we are all just walking each other home - Ram Dass #worldgratitudeday (sic)," Anushka captioned the image.