Anurag Kashyap's daughter Aaliyah's emotional birthday post for him: Love you and miss you

Filmmaker Anurag Kashyap's daughter Aaliyah shared an emotional birthday post for her filmmaker father on his 48th birthday. Aaliyah shared a couple of pictures of the filmmaker on her Instagram stories and wished him on the special day.

Filmmaker Anurag Kashyap's daughter Aaliyah shared an emotional birthday post for her filmmaker father on his 48th birthday. The filmmaker is known for films like Gangs of Wasseypur and Manmarziyaan which earned him much praise from the viewers. Aaliyah shared a couple of pictures of the filmmaker on her Instagram stories and wished him on the special day.

In one of the pictures which appear to be a screenshot of a video call between the two, Aaliyah wrote, "Happy birthday papa (heart emoji) Love u and miss u so much." Another picture that features a younger Anurag Kashyap shows him holding little Aaliyan on his lap. She wrote, "See you soon hopefully." 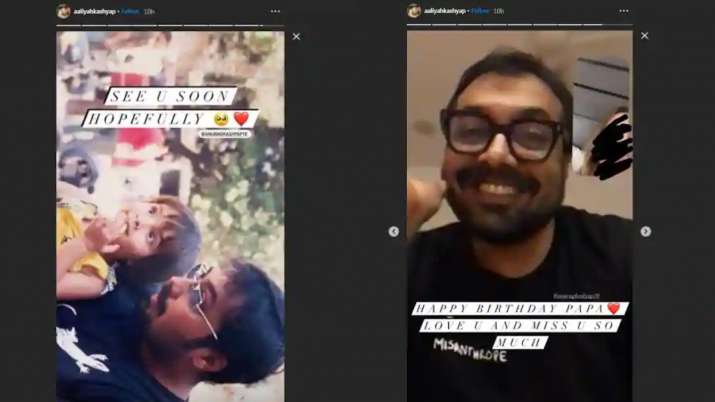 Talking about his daughter Aaliyah entering Bollywood, Anurag Kashyap had earlier said, "She’s an adult, she has to choose, but definitely she has to learn. She can’t wake up one day and say ‘I want to be an actor’. . If she wants to do it, she has to struggle for it and go and audition for it and win a role somewhere. I don’t think I write movies which are so urban where she will fit in. She’s an urban kid, she’s not a street kid like me."

On Wednesday, Anurag Kashyap ruled the headlines after he released WhatsApp chats with late Sushant Singh Rajput's manager and revealed that he had his reasons of not working with the actor. He wrote, "am sorry that I am doing this but this chat is from three weeks before he passed away. Chat with his manager on 22 May .. havent don’t it so far but feel the need now .. yes I didn’t want to work with him for my own reasons"  In another tweet, he wrote, "Also My conversation with his manager on June 14th. It will show you things if you want to see. It feels horrible to do this but can’t keep it back .. and for those as well who think we didn’t care for the family. As honest as I can be .. judge me all you want .."

On the work front, Anurag Kashyap directed a part of Ghost Stories. He also treated fans with the film Choked that garnered much praise from the viewers.