Aanand L Rai's Tanu Weds Manu starring R Madhavan and Kangana Ranaut went on to become a sleeper hit. The unusual love story of Tanu (Ranaut) and Manu (Madhavan) has been etched in the hearts of movie buffs for giving the Hindi film heroine a rebellious vie.

Aanand L Rai's Tanu Weds Manu starring R Madhavan and Kangana Ranaut went on to become a sleeper hit. The unusual love story of Tanu (Ranaut) and Manu (Madhavan) has been etched in the hearts of movie buffs for giving the Hindi film heroine a rebellious vie. The film, which released in 2011, clocked 10 years today. In celebration of its 10th anniversary, Madhavan took to his Twitter handle to share a heartfelt note thanking the entire team of the film. He also shared a poster of the romantic-comedy movie.

The actor tweeted, "@aanandlrai @KanganaTeam @vikramix @Viacom18Studios Thank YOU ALL SOO SOO MUCH for this awesome piece of history. Will cherish this for the rest of my life. #10yearsoftanuwedsmanu." He also took to his Instagram and thanked Aanand L Rai for the memories. He wrote, "Thank you Aanand ... for giving us all our own little piece of history... and fondest of memories... god bless you mere bhai." 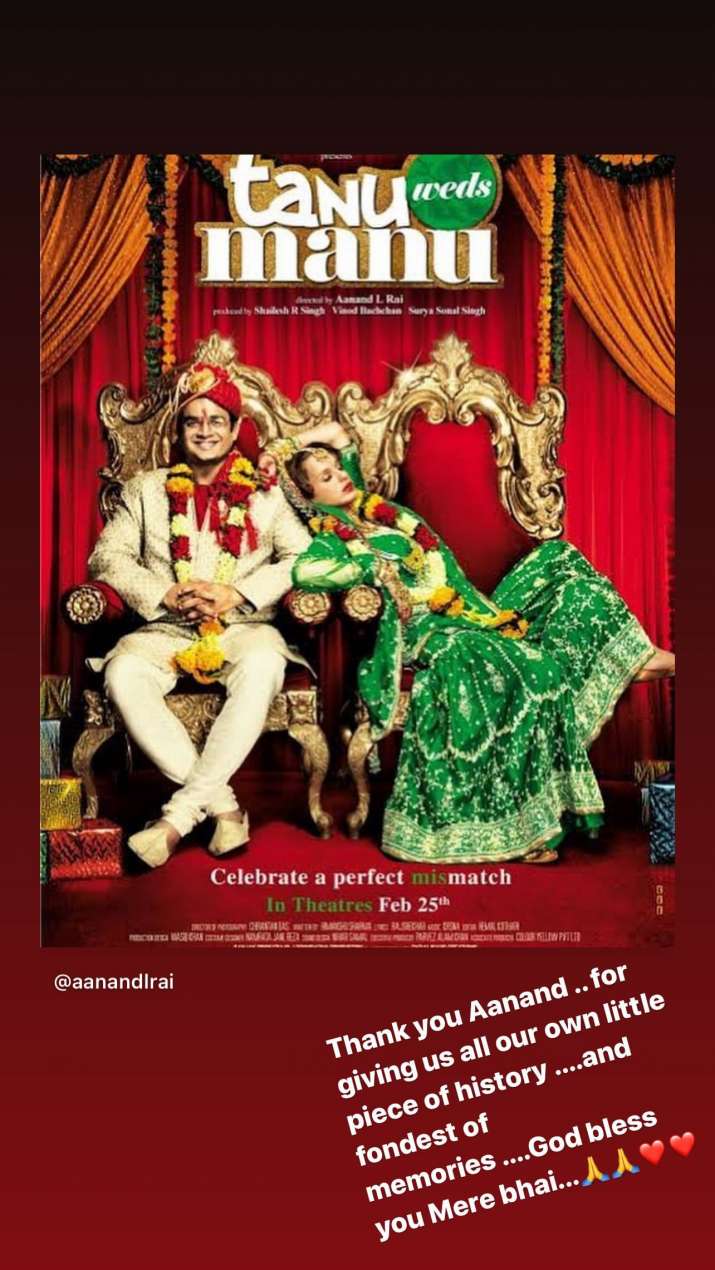 The director of the film also took to social media to thank his fans for loving the film and giving him an identity. Calling himself 'Woh Tanu Weds Manu Wala director', he penned a heartwarming note.

L Rai wrote, "Someone said so beautifully..."Nothing of me is original, I am the combined effort of everyone I have ever known" Thank you for giving me my identity Thank you for making me 'Woh Tanu weds Manu Wala Aanand Rai' Thankyou." 'Tanu Weds Manu' is the story of Tanu (Ranaut) and Manu (Madhavan). It followed Tanuja Trivedi or Tanu, who is a bold girl and lives in Kanpur with her parents. Her family wants her to get married and therefore fix a meeting with NRI Doctor Manoj Kumar Sharma alias Manu. But Tanu is in love with someone else. The story then sees many highs and lows. In the end, Tanu realizes her love for Manu and they get married. The film also featured Jimmy Shergill, Swara Bhasker, Deepak Dobriyal, and Eijaz Khan, among others, in pivotal roles.

Actress Kangana Ranaut also tweeted, "I was stuck in edgy/neurotic roles, this film changed the trajectory of my career, was my entry in to mainstream that too with comedy, with Queen and Datto I strengthened my comic timing and became the only actress after legendary SriDevi ji to do comedy."

She added, "Thanks to @aanandlrai and our writer Himanshu Sharma for this franchise, when they came to me as struggling makers I thought I can make their careers but instead they made my career, one can never tell which film will work and which won’t,all destiny, glad my destiny has you"

'Tanu Weds Manu' was followed by 'Tanu Weds Manu Returns' in 2015. It narrated the story of Tanu and Manu after their wedding. The sequel, which featured Ranaut in double roles, went on to become a bigger hit.