Kartik Aaryan is ruling the headlines these days for multiple reasons. While the news of his rumoured relationship with co-star Ananya Pandey is the talk of the town, the actor’s first look from his next flick Pati, Patni Aur Woh has turned into viral memes on the internet. Twitterati is coming up with the most hilarious memes by comparing two of his pictures on the social media. It all started with Kartik Aaryan taking to Instagram to share the first look.

The Sonu Ke Titu Ki Sweety actor introduced himself as Chintu Tyagi from Lucknow who is very Samarpit yet Aashiq Mijaaz, in his own words. Sharing the look, he wrote, "Miliye Lucknow ke Chintu Tyagi Ji se #Samarpit #AashiqMizaaj #Pati #PatiPatniAurWoh." Ananya Pandey who is her co-star in the film commented on it with fire emojis. While fans were still cherishing the comment, Kartik took no time to reply to Ananya and said, Ananya be a bit professional, come for your shot!" Ananya responded saying, "Waiting for your shot to get over sir!" Their cute banter definitely made the day for all their fans. Have a look- 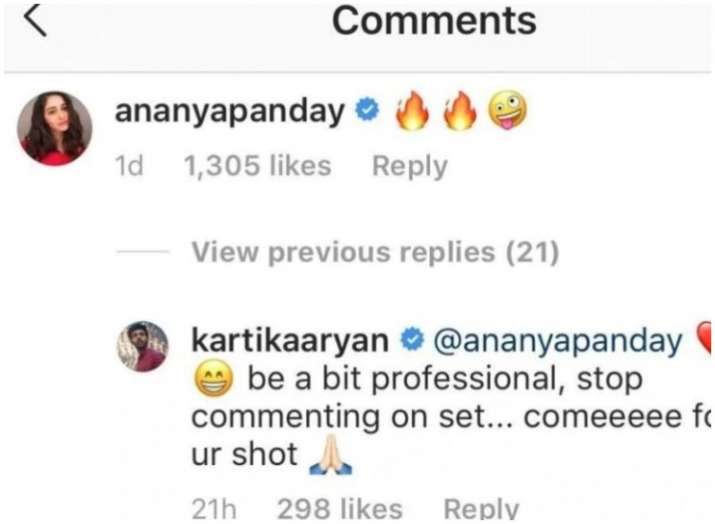 Kartik Aaryan is paired opposite Ananya Panday and Bhumi Pednekar in this Mudassar Aziz directorial film. It is yet unknown who among Ananya and Bhumi will be playing his onscreen wife and who'll be his girlfriend. On Monday, the team announced that the film has gone on floors. In the picture, Bhumi Pednekar was missing while Kartik and Ananya hid their faces with the clapboard.