Not only the common people, Avengers: Endgame has found fan following in Bollywood as well. Last night, many Bollywood celebrities including Alia Bhatt, Ranbir Kapoor, Janhvi Kapoor, Tara Sutaria and others attended the Avengers: Endgame special screening. Amid the hullabaloo, Akshay Kumar shared a picture of himself next to Robert Downey Jr. aka Iron Man. He points out that the superhero is wearing the same tie as him. It's a Givenchy tie with black and white abstract prints on it. 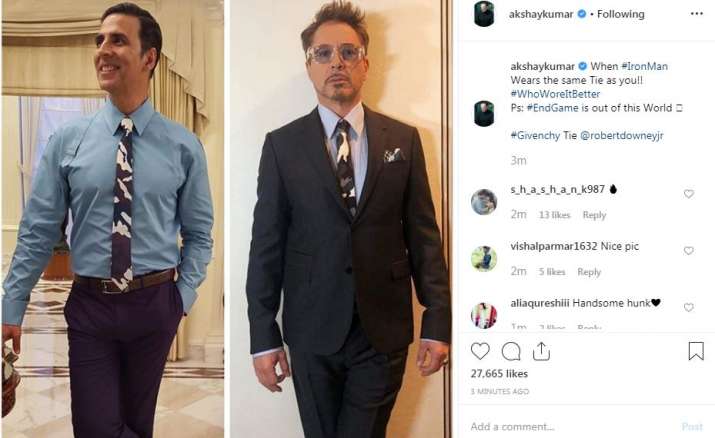 Will Chris Hemsworth return to Avengers as Thor? Here's what he has to say

Sharing the picture, Akshay Kumar wrote, "When #IronMan Wears the same Tie as you!!

#WhoWoreItBetter
Ps: #EndGame is out of this World."

He also asked who wore it better, so we would leave this to you to decide who's looking better in this chic Givenchy tie.

Talking about Avengers: Endgame, Akshay Kumar wrote, "Ps: #EndGame is out of this World."

It seems like Avengers: Endgame is getting rave reviews not only from film critics but also the celebrities. About its box office performance, the Marvel Studios film has already minted Rs 53 crore in India for its Hindi version. The numbers are expected to cross Rs 200 crore over this weekend. Worldwide, the film has earned around Rs 2000 crore at the BO.

On the work front, Akshay Kumar's Good News will now release in December instead of September. Due to unknown reasons, the film's release has been deferred by two months.